The 3 best heroes to counter Meepo

If you didn’t ban Meepo, here’s how you beat him. 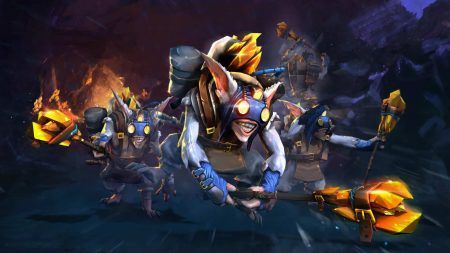 Meepo the Geomancer is notorious for being one of the most difficult heroes to play since you need good micromanagement skills in order to play him effectively.

However, a Meepo in the hands of a capable player can win the game almost single-handedly.

So if ever you find yourself matched up against a good Meepo in one of your pubs then these are the heroes you should be picking:

This should be a no-brainer. If ever you’re up against heroes with a lot of illusions, summons, or clones of themselves, then Earthshaker can wipe them off the map with a well-placed Echo Slam.

Let’s put into perspective how good of a Meepo counter Earthshaker can be. If he has his Level 20 Echo Slam damage selected and hits four Meepos with a Level 3 Echo Slam, then it deals 1,080 damage before reductions to each Meepo for a total of 4,320 damage. If he lands Echo Slam on a Meepo with Aghanim’s Scepter for a total of five Meepos, then each Meepo is hit with 1,380 damage for a total of 6,900 damage.

And that’s just the damage from an Echo Slam on just the Meepo squad too, imagine how much damage it can deal if there are other heroes and creeps nearby. You also have to take into account that Earthshaker will also follow up with the rest of his kit too, so if Echo Slam wasn’t enough to kill a Meepo then the follow-up should do the trick.

Winter Wyvern’s Winter’s Curse ultimate is arguably the best Meepo-killing ability in the late game. If you can land the ultimate on a group of Meepos, then the target Meepo is guaranteed to come out of it on low health, if he wasn’t already killed by his fellow Meepos during its duration.

Meepo won’t be able to counter Winter’s Curse with Linken’s Sphere or Lotus Orb either, as Winter Wyvern can just target one of the Meepo clones even if the main Meepo has those items.

Her other abilities aren’t bad at countering Meepo too. Splinter Blast is guaranteed to hit multiple Meepos in a group while Arctic Burn can deal a lot of damage to a single Meepo since the hero stacks a lot of attributes. Cold Embrace is good at saving allies that are being targeted by Meepos as well.

Elder Titan’s entire skillset seems tailor-made to counter Meepo, as they give him two of the most important things you need to take him down: long-duration disables and burst damage.

First off, Elder Titan’s Echo Stomp can completely disable multiple Meepos for five seconds and is an effective setup for him and his team. His Astral Spirit affects Meepo clones, as they don’t count as illusions, thus giving him a massive amount of damage, armor, and movement speed to make him even better at being a Meepo killer. His Natural Order passive also completely negates Meepo’s base armor and magic resistance, making the rat much easier to take down.

As if that wasn’t enough, Elder Titan’s Earth Splitter ultimate deals over half of each Meepo’s max health and is even stronger when they are affected by Natural Order.

What if I’m up against a last-pick Meepo?

Of course, you can only get Meepo-killing heroes if Meepo wasn’t last-picked. However, most Meepo players will pick him last if there are no heroes on the other team that can outright counter them.

So, if ever you got matched up against a last pick Meepo, here’s how you can still come out with a win:

Shut him down early

Meepo needs to spend a lot of time in lane and in the jungle during the early game before he can turn into the midgame terror that he is. Keep this in mind as you try to slow down the enemy Meepo’s timing as much as you can, if not outright shut him down.

Common mid heroes that are effective in shutting down Meepo in lane include Kunkka and Viper, though a couple of well-timed ganks will also do the trick.

Meepo players usually start jungling once they reach Level 4, when they get their first Meepo clone. Coordinate with your team and make good use of Observer Wards and Smoke of Deceit to get the jump on the enemy Meepo while he’s busy farming to further delay his timing.

Try to survive until the late game

While a farmed Meepo in the hands of a capable player is capable of winning a game by himself, the hero itself is bound to fall off in the late game. So, if your team is unable to shut down Meepo early or is built around a hard carry, then you’ll have a good chance of still walking away with a win once the game goes late. Of course, that scenario assumes your team didn’t get run over by Meepo in the mid game.

The hard carry heroes that excel against Meepo in the late game are the ones that can stand and deliver either single-target or area-of-effect (AoE) damage. So, you’ll want to take on Meepo late when you have Sven, Monkey King, Troll Warlord, and Ember Spirit.

These heroes in particular are more effective against Meepo compared to the likes of Phantom Assassin and Medusa because they are up-tempo carries that can fight Meepo in the early-to-midgame while still being able to scale into the late game.

Meepo will never build Black King Bar, so abuse that fact and get items like Scythe of Vyse, Orchid Malevolence, and Abyssal Blade to single out a Meepo from the rest of the group to take him down.

Meepo also cannot counter evasion effectively, so evasion items like Butterfly and Heaven’s Halberd will greatly increase your survivability against him. Of course, general survivability and teamwide buff items like Mekansm, Guardian Greaves, Crimson Guard, and Vladmir’s Offering will also greatly aid your team in tanking through Meepo’s damage.

Shut down the rest of his team

As we said earlier, Meepo needs to spend a lot of time farming before he can turn into the midgame monster that he is, which also means that his team will be playing four-versus-five for a good chunk of the game.

If you are unable to shut Meepo down directly, then it’s a good idea to target the rest of his team instead. Sure, a very good Meepo player is able to win a game by himself, but he’ll find that very difficult to do if his teammates can’t help him.

What else needs to be said? We got hero bans in All Pick and Captain’s Mode for a reason.