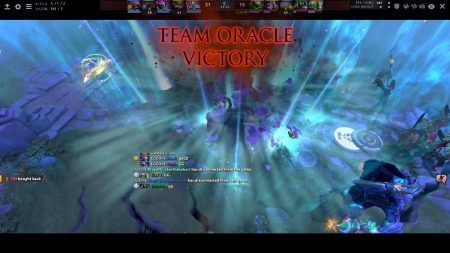 Malaysian squad, Team Oracle, has won the Malaysia Open Qualifiers for the ONE Esports Jakarta Invitational.

In the grand finals, Oracle faced off against the newly-formed LGD.International in a best of 3 match for a spot at the Jakarta Offline Qualifiers.

In game one dominated throughout on the back of a strong combination of Ou “No7” Meng on Void Spirit and Steven “Monster” Noel on Mars.

The second game saw LGD.Int doing much better, as they got off to a great start, racing out to an 11-0 lead.

However, Oracle did not give up, and fought back to a 10,000 gold lead, forcing Mega Creeps on LGD.

Despite being behind 15-21 on kills, Oracle managed to close out the game at the 35-minute mark, with 123’s Viper smashing down the last tower, and forcing the GG.

Team Oracle has now qualified for the Jakarta Regional Qualifiers, which will take place on March 14-15 at Mall Taman Anggrek in Jakarta.