Ori and Eurus carry Vici Gaming to victory over PSG.LGD 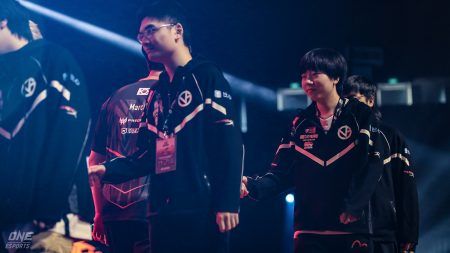 Vici Gaming continue their winning ways with a victory over PSG.LGD in the Upper Bracket Final of the OGA Dota Pit 2020: Online China tournament.

They swept their regional rivals 2-0 to advance to the Grand Final.

Vici Gaming core duo, Zeng “Ori” Jiaoyang on the Razor and Zhang “Eurus” Chengjun on the Ember Spirit put together crucial game two performances that lead their team to close out the series.

After losing the first game of the series, PSG.LGD answered back by outperforming VG in the early to mid-game team fights. They punished VG’s chase attempts against Lu “Somnus`M” Yao’s Void Spirit.

But VG was able to derail PSG.LGD’s momentum with an amazing play by Ding “Dy” Cong who baited Yang ” Chalice” Shenyi’s Gyrocopter to chase after his Lich.

PSG.LGD tried to play more aggressively since they knew VG’s lineup was better built for the late game. But, Zhou “Yang” Haiyang’s Dragon Knight counter-initiated on Ren “old eLeVeN” Yangwei’s Pangolier that eventually led to another death for Chalice.

After teamwiping PSG.LGD outside the Rosh Pit, VG took complete control of the game and, when four VG heroes were able to farm their own Black King Bars, shut down PSG.LGD’s chances of a comeback.

With their convincing 2-0 sweep, Vici Gaming advanced to the Grand Final where they will be competing for the lion’s share of the US$60,000 prize pool.

Meanwhile, after losing to VG, PSG.LGD survived two grueling games against EHOME in the Lower Bracket Final. This sets up a rematch against VG, and the winner will be crowned OGA Dota Pit 2020 Online: China’s champion.