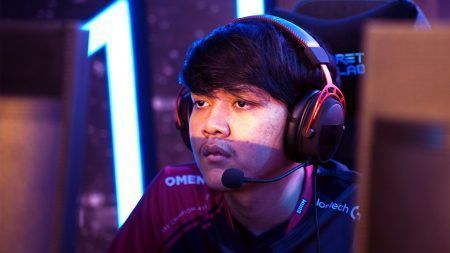 Despite scoring a convincing victory in game one of the series, BOOM Esports struggled at the start of the following game after losing all of their lanes. Luckily for BOOM, Geek Fam’s over-aggression gave them the opportunity to equalize the game after Alfi “Khezcute” Nalphyana dropped his Echo Slam-Fissure combo on three enemy heroes to help them win their first teamfight.

A few minutes later, Saieful “Fbz” Ilham on Mars scored a kill on Matthew “Whitemon” Filemon’s Keeper of the Light after picking up a haste rune. This prompted BOOM to charge straight into another fight against Geek Fam, where Mikoto’s Ember Spirit earned his first Ultra Kill of the game.

Immediately after losing a fight outside their base, Geek Fam made the critical mistake that cost them the game. They reengaged with BOOM by the Radiant secret shop, where their heroes died after using crucial buybacks as Mikoto scored another Ultra Kill and a Beyond Godlike streak.

With no heroes left to defend their base, Geek Fam called good game at the 28-minute mark as BOOM took the series in commanding fashion.

BOOM Esports finished their group stage run with a 4-3 record, good for third place in the standings and a direct seed to the Playoffs where they’re set to face Fnatic in the Upper Bracket Quarterfinal.

Meanwhile, Geek Fam dropped into a tie for sixth place with T1 but will still advance to the Lower Bracket of the playoffs since they won their series match against T1 in the round-robin group stage.