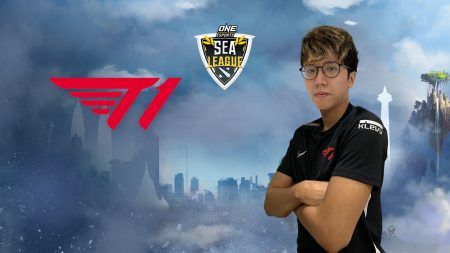 After a narrow defeat in game one, RR looked to at least end the series with a tie by drafting a heavy burst damage lineup. Andrew “Drew” Halim was put on Riki, Hiew “AlaCrity” Teck Yoong was on Templar Assassin, Lee “kYxY” Kong Yang was on an offlane Kunkka, Ravdan “Hustla” Narmandakh was on Skywrath Mage, and Wong “NutZ” Jeng Yih had Treant Protector.

T1 controlled much of the early to midgame, as Meracle’s Monkey King made short work of the opposition. However, RR was able to delay the game and take control of the game themselves once their cores started to dish out huge amounts of damage.

Seeing that his team lacked the firepower to contend with RR’s lineup, Meracle picked up his first Divine Rapier at the 51-minute mark. That allowed T1 to repel multiple siege attempts by RR and turn the tides in their favor.

RR eventually exhausted their resources after repeated futile attempts in breaking through their opponent’s defenses. Meracle took advantage of that opening and got a second Rapier to seal his team’s comeback win. T1’s carry player finished with an excellent 20/2/7 KDA in 70 minutes of action.

With their win, T1 moved to first place in the group stage standings with 6 points from two series wins against one loss. Their next match will be against Team Adroit on Day 1 of Week 2 of the SEA League Group Stage on June 25.