Lackluster performance by PSG.LGD drops them to the lower bracket. 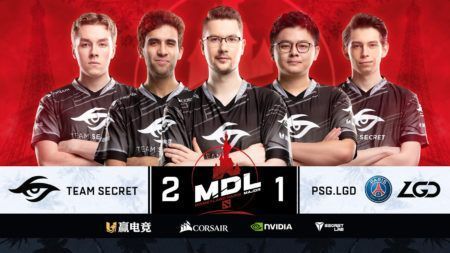 Two heavyweight Dota 2 teams faced off each other to kick-start the playoff stages of the MDL Disneyland Paris Major yesterday.

Game one featured an interesting meta choice for Team Secret. They picked Luna as a support (even though the hero is typically played as a carry). Even though they have done this in past tournaments, it’s rare to see professional teams take such a gamble in a high caliber Major. However, it paid off once they got an Aghanim’s Scepter on their Luna, which lets her cast her ultimate on a person or an area. Team Secret dominated PSG.LGD in team fights which gave them an early 1-0 advantage in the series.

In the next bout, we saw PSG.LGD go with Lu “Somnus” Yao’s iconic Storm Spirit that punished Team Secret’s greedy Alchemist draft. The Chinese squad kept an aggressive play style all throughout the match, hunting down targets in the enemy jungle which made Team Secret shell up until they couldn’t defend their base anymore. PSG.LGD tied the series, 1-1.

The final game of the series turned out to be baffling, as PSG.LGD, one of the best Dota 2 teams in the world, make plenty of amateur mistakes which Secret’s Ludwig “Zai” Wahlberg capitalized on. Once Team Secret’s Anti-Mage reached critical mass 25 minutes into the game, it was all but over. The European squad moves on to the next round of the upper bracket where they’re set to face OG.

The first day of the playoff stages also featured elimination matches with Complexity vs Beastcoast and Mineski vs Team Empire.

The MDL Disneyland Paris Major continues later today and will be streamed here.