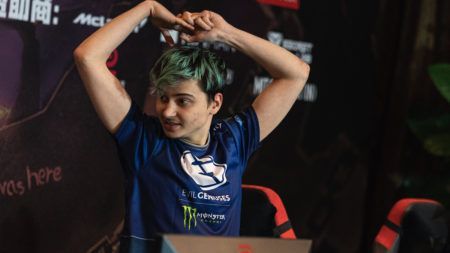 After a surprise loss to Team Liquid during Group B’s Winners’ Match, the team bounced back by defeating Team Aster 2-1 to move into the Upper Bracket of the playoff stage. Meanwhile, Invictus Gaming had gone undefeated in Group D to advance.

In the first game, iG drafted the popular Lina and Night Stalker, while EG took a Position 4 Pangolier together with a Faceless Void for Artour “Arteezy” Babaev.

Both teams had a decent laning phase to start the game. But as soon as both teams started rotating as a group, EG showed a clear advantage in team fights with the Chronosphere ultimate that completely stopped iG.

The following game was more competitive, with iG taking more traditional cores with the Gyrocopter and Invoker. In response, EG took the high win-rate hero Chen for Tal “Fly” Aizik.

At the 21-minute mark, EG pulled off an impressive heads-up play. While they were pressuring the Radiant tier two Tower, Ramzes666 teleported in the open to force iG out of their base. Once the Radiant squad tried to capitalize on a separated EG squad, Fly used Chen’s Divine Favor ability to bring back Ramzes666 with Arteezy to eliminate four of iG’s heroes.

iG managed to answer back as Thiay “JT-” Wen caught two EG heroes at the Radiant Shrine with the Berserkers Call. The remaining iG heroes cast all their spells to quickly burst Arteezy down and force EG to retreat.

After a critical error from Zhou “Emo” Yi, who ran downriver after his Black King Bar wore off and was picked off, EG took full control of game two and finished the series at the 45-minute mark with a Radiant Fountain dive.

With a 2-0 win over Invictus Gaming, Evil Geniuses is now set to take on tournament favorites Vici Gaming next during the Upper Bracket Semifinals.

Meanwhile, Invictus Gaming dropped to the Lower Bracket where they will battle with Fnatic in a best-of-three elimination match.