Liquid survive another crazy late game to stay alive at the Leipzig Major. 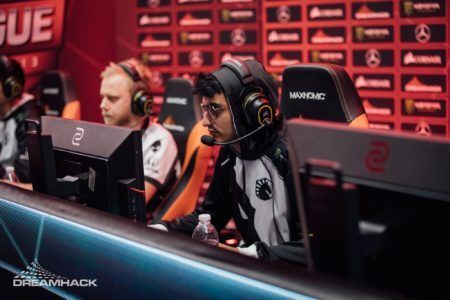 Team Liquid outlasted Natus Vincere (Na’Vi) in an 81-minute marathon game one, despite Na’Vi having two Divine Rapiers, in this Lower Bracket elimination match on Day 3 of the Leipzig Major.

Liquid was in control of the game virtually from the get-go but could not break through a resilient high-ground defense from Na’Vi, even if they had an ultra-farmed Morphling for Michael “miCKe” Vu and enjoyed a gold advantage that ballooned to as much as 50,000.

The lynchpin of the Na’Vi defense was Idan “MagicaL” Vardanian’s Sniper, who made good use of his hero’s absurd attack range by picking up his first Divine Rapier at the 41-minute mark to keep Liquid at bay.

Na’Vi’s successful high-ground holds gave them the confidence to venture out of their base to try and take the fight to Liquid’s side of the map. However, Liquid was too far ahead and Na’Vi could not take them head-on outside the safety of their base, which only served to delay the game even further.

The stalemate lasted long enough for the game to reach the 70-minute mark, when the game-breaking Tier 5 neutral items started to spawn.

Na’Vi acquired great items in the Stygian Desolator, Trident, and Fallen Sky for their other heroes to go with MagicaL’s second Divine Rapier, but these all paled in comparison to what Liquid was able to get: the overpowered Apex-Fusion Rune combo.

The Apex increases the primary attribute of its holder by 80% while the Fusion Rune grants the bonuses of all the Power Runes — Arcane, Haste, Invisibility, Illusion, Regeneration, and, most importantly, Double Damage.

Put those two together on Morphling and you have a hero hitting for a whopping 1,200 damage per hit and going through barracks like a hot knife through butter.

Na’Vi was admirably able to hold on for some time even after that, but they could not stop Liquid from eventually closing the game out after 81 minutes.

Liquid went on to win game two in 47 minutes to complete the series sweep over Na’Vi, the first sweep of the Leipzig Major Playoffs. With their win, Liquid secure a Top 8 finish and move on to the next round of the Lower Bracket against TNC Predator.