Into the Invitational: J.Storm is looking to solidify their claim as TI contenders

Can J.Storm take the next step and compete with the best Dota 2 teams in the world at the Invitational? 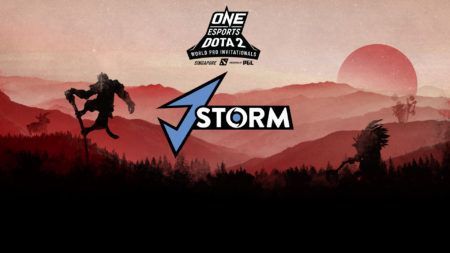 J.Storm had a difficult 18/19 DPC season, with a roster made up of a mix of international players with veteran experience and young up and coming talent. The team struggled to find their groove and failed to gain much momentum through the season.

The North American squad did manage to qualify for the first three DPC Majors of the season, but in all three, ended up being eliminated early.

The team did make an impressive run at the North American regional qualifiers for The International 2019, but were stopped by Forward Gaming in the grand finals.

After TI9, J.Storm made adjustments to their roster. Sivatheeban “1437” Sivanathapillai and Roman “Resolut1on” Fominok both decided to leave the team, and were replaced by Joel “MoOz” Ozambela and Braxton “Brax” Paulson.

J.Storm’s roster for the ONE Esports Dota 2 Invitational:

J.Storm’s newly revamped roster immediately exceeded expectations at the North American Chengdu Major qualifiers, finishing the group stage with a 4-2 record, and beating Quincy Crew (now Chaos Esports Club) in the playoffs to qualify for the first Major of the 19/20 season.

At the Chengdu Major, they finished second in Group D, outperforming Beastcoast and Gambit Esports to secure an upper bracket spot in the Main Event.

In the Upper Bracket, they upset Team Liquid 2-1, before falling to eventual champions, TNC Predator.

In their Lower Bracket match, they were eliminated by Invictus Gaming, finishing in 5th/6th place.

The ONE Esports Dota 2 World Pro Invitational will be another chance for J.Storm to prove themselves against high caliber teams and show that their top six finish at the Major was not just a fluke.