Into the Invitational: Evil Geniuses will flex its new international roster

With a roster that boasts top-tier players from around the globe, can Evil Geniuses’ new squad win the Invitational? 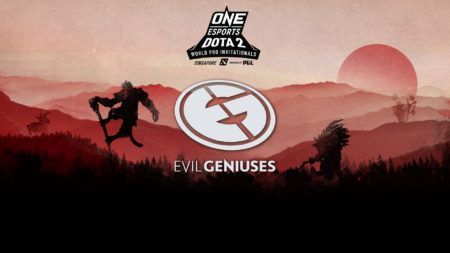 However, the team’s infamous third place curse followed them for most of the season, as they finished third in the Kuala Lumpur, Chongqing, and Paris Majors.

While most other teams would be happy with these results, they did not live up to the expectations of a team as stacked and decorated as EG. Things took a further downturn for the team as the season drew nearer to TI9, as they bottomed out of the EPICENTER Major, finishing in 13th-16th place.

The team’s slump continued into the Group Stage of TI9, where they started with a 1-5 record. However, they managed to bounce back, finishing with a 8-7 overall record, finishing third in their group and booking a ticket to the Upper Bracket of the Main Event.

In the first round of the Knockout Stage, EG outlasted Team Secret in a hard-fought 2-1 opening matchup, but were sent to the Lower Bracket by rivals and eventual champions OG.

EG were eventually eliminated by a rampaging Team Liquid, bowing out in 5th-6th place, the lowest TI finish for the organization since 2014.

In one of the biggest roster shuffles in Dota 2’s history, EG announced in mid-September that SumaiL and s4 will be replaced by former Fnatic midlaner Abed Azel “Abed” Yusop and former Virtus.pro carry Roman “RAMZES666” Kushnarev.

The departure of SumaiL signals a huge change of direction for EG, as the star midlaner was key in the team raising its first Aegis of Champions at TI5 and has anchored their sustained success since. Not only will the team now be centered around star carry Arteezy instead, the perennial American squad now relies on talent from all around the globe.

Evil Geniuses’ roster for the ONE Esports Dota 2 Invitational:

Diversity is strength seems to be the core tenet for EG coming into the season. Abed and RAMZES are among the best young talents from their respective regions, and Cr1t and Fly remain one of the more formidable support duos around. Arteezy is still a top carry, despite doubts whether his style of play is conducive to winning in the prevalent competitive metagame.

While communication and chemistry issues are to be expected in a team consisting of a Canadian, a Filipino, a Russian, a Dane, and an Israeli, EG didn’t seem to miss a beat to start the season. The squad breezed through the North American qualifier for the MDL Chengdu Major, dropping only one game in the process.

EG’s 2019-2020 roster will make its LAN debut at the MDL Chengdu Major, but the ONE Esports Dota 2 Singapore World Pro Invitational will be their first chance to face off against some of the previous season’s top teams that have opted to skip the first Major of this season, such as Team Secret and PSG.LGD.

How they fare in Singapore may very well show how far this new international EG squad can go.