There was even a guest appearance by Gaben! 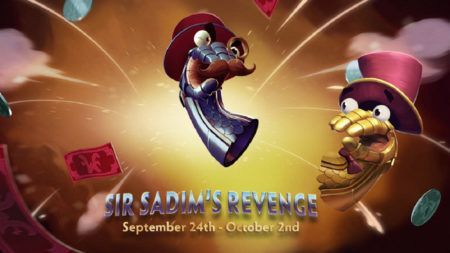 The highly anticipated Midas Mode 2 tournament began yesterday and it was filled with ridiculous moments.

To kick things off, Moonduck Studios spared no expense in organizing their event’s opening ceremony. They even got Gabe Newell to make an appearance via recorded video.

Right at the start of the broadcast, the Dota 2 panel expressed their thoughts on how two-time back-to-back TI winners OG might just end up dominating the entire tournament.

Jake “SirActionSlacks” Kanner revealed, however, that OG’s position 1 (carry) Anathan “Ana” Pham has been nerfed. He will be playing all the way in Australia with a 300 ping connection.

Another important mechanic SirActionSlacks forgot to bring up prior to the event was that Twitch chat and the live studio audience were going to be given the first three bans during the drafting stage for all matches. Twitch chat quickly made use of this feature by banning Techies, Io, and Alchemist.

The first match of the day was between TI3 Alliance and the Sir Sadim Stunners. Fans quickly saw all the new features of this year’s Midas Mode 2. First, we saw how overpowered Super Roshan was with someone in-studio controlling him via VR headset.

Midas Mode 2’s VIP guests were also allowed to play as creeps during matches. Sadly though, some fan didn’t really want to play as the creep so he decided to dive into the Dire tier two tower.

We also saw one of the pre-purchased hero skins, which was bought by the ESL team. Kunkka was seen covered in ESL merch including the ESL Trophy on his back.

During the first game of Midas Mode 2, after the Sir Sadim Stunners lost their Barracks, Janne “Gorgc” Stefanovski decided to pick up the AYAYA Divine Rapier.

Almost every item in Midas Mode 2 has been changed, in hopes of confusing the players for a more exciting game. The AYAYA Divine Rapier is, of course, a popular anime meme often seen in Twitch chat.

Another important thing to note is that the TI3 Alliance team had Rasmus “Chessie” Blomdin replace Gustav “s4” Magnusson, who was unable to join the tournament. Regardless, the TI3 Alliance squad still managed to beat the Sir Sadim Stunners 2-0 to start Midas Mode 2.

Unfortunately, Moonduck Studios had to revert back to the regular version of Dota 2 for the rest of day 1 due to technical issues with the observer camera.

To view the rest of the matches from Day 1 of Midas Mode 2, click here.