C9 is making a comeback with a mix of veteran leaders and promising young players. 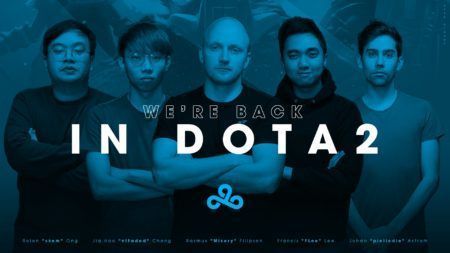 After two years of inactivity in the scene, Cloud9 has returned to Dota 2 with a roster led by two of its former players in Johan “pieliedie” Åström and Rasmus “MISERY” Filipsen.

Pieliedie and MISERY played under the C9 banner in 2014 and 2015, respectively, and will be the veteran leaders of a new roster rounded out by young talent.

Rolen “skem” Ong will be the team’s Position 1 carry player, having played under the likes of Geek Fam, compLexity Gaming, and Neon Esports before joining C9.

Jia Hao “vtFaded” Cheng will be the team’s midlaner, having notably played with skem in Geek Fam back in 2018 and with MISERY in Chaos Esports Club during The International 2019 (TI9). He began the season with Chinese team EHOME, but left the team shortly after due to conflicts within the team before landing with C9.

Meanwhile, Francis “FLee” Lee has been competing in the North American scene as far back as 2015 and notably helped Demon Slayers to a 2nd-place finish at DreamLeague Season 12.

“Ever since departing the Dota 2 space in 2017 we’ve been keeping an eye on finding the best time to re-enter and I’m glad to say it’s finally arrived. These players have had success across the world and everyone here is looking forward to what they’ll do as a team,” said Jack Etienne, C9’s owner and CEO.

The new C9 roster will initially be playing in Southeast Asia for the third Major cycle of the 2019-2020 Dota Pro Circuit (DPC) season, but will move to North America for future events.

C9 is expected to make its DPC debut in the qualifiers of the ESL One Los Angeles Major 2020 in early February.