The Filipino team has earned a spot in the Grand Final. 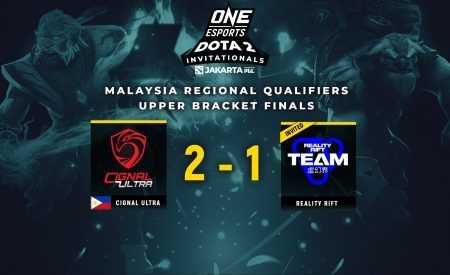 The Upper Bracket Final of the ONE Esports Dota 2 Jakarta Invitational Malaysia Qualifier saw Filipino squad, Cignal Ultra, going up against Singaporean squad, Reality Rift, in a best-of-three series that went down to the wire.

Cignal Ultra started the series with Slark, Queen of Pain, and Pangolier as core heroes. Meanwhile, Reality Rift decided to go with Troll Warlord, Outworld Devourer, and Kunkka for each of their lanes.

Ravdan “Hustla” Narmandakh set the pace of the game by making plays around the map with his Rubick and stole Queen of Pain’s Sonic Wave ultimate to take down the enemy Pangolier just 10 minutes into the game.

Both teams pushed the action by taking team fights in the middle lane. The team that secured an early pickoff often took control of the mid-game team fights, but RR’s Troll Warlord and Kunkka eventually outpaced Cignal Ultra’s core heroes.

Hustla made more amazing plays against Cignal Ultra with his Rubick, first by dodging the Slark with his Ghost Scepter, then by stealing Pounce and taking down Cignal Ultra’s hard carry.

Next, Hustla tracked down the enemy Queen of Pain by stealing her Blink and dispelling her Orchid Malevolence, taking her down.

Reality Rift eventually sieged the Radiant base where Hustla made an amazing initiation play with a stolen Rolling Thunder ultimate that locked down Cignal Ultra’s Winter Wyvern. With most of the Radiant heroes out, RR continued to take objectives up until Cignal Ultra was forced to call gg.

In game two, Reality Rift’s first two draft picks were Rubick and Lifestealer, along with Ember Spirit and Phoenix as the next two cores.

After an evenly contested laning phase, Cignal Ultra took the advantage when they caught Wong Jeng “NutZ” Yih’s Bane with a well-placed Ice Shards, and then proceeded to eliminate RR’s heroes one by one.

Reality Rift answered back with Andrew “drew” Halim’s Lifestealer who had a newly farmed Desolator. drew quickly shredded through Cignal Ultra’s heroes and forced them to retreat.

A few minutes later, RR executed a successful smoke gank that led to a team wipe outside the Rosh pit.

Cignal Ultra took back control of the game after catching RR spread out and vulnerable. The Dire team continued losing heroes as they entered team fights one by one trying to save each other.

From there out, Cignal Ultra kept the momentum and closed out the game after a prolonged team fight saw them take down RR’s Lifestealer and Ember Spirit without buybacks.

In the final game of the day, Reality Rift decided to go with Abaddon, Slark, and Templar Assasin as their core heroes.

After another even laning phase from both teams, Hiew Teck “AlaCrity” Yoong’s Templar Assassin gave Reality Rift the slight edge after his Blink Dagger reveal caught Cignal Ultra off guard.

Cignal Ultra gained back control of the game after they team wiped Reality Rift including die-back kills.

This helped the Filipino squad gain a 6,000 gold lead at the 26-minute mark.

Reality Rift attempted a wrap-around smoke gank play with AlaCrity’s Templar Assassin, but he was quickly locked down and eliminated. Cignal Ultra then proceeded to take out the rest of the Dire team’s heroes, forcing Reality Rift to call gg.

With their 2-1 victory, Cignal Ultra advances to the Grand Finals of the ONE Esports Dota 2 Jakarta Invitational: Kuala Lumpur Qualifier.

Meanwhile, Reality Rift falls to the Lower Bracket Finals where they await the winner of 496 Gaming and MS Chonburi’s Lower Bracket semifinal match.