Quincy Crew has finally found a home under the Chaos EC banner. 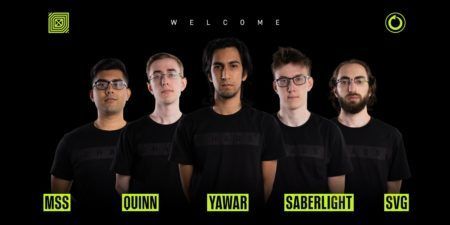 Chaos Esports Club has reentered the Dota 2 scene by picking up North American squad, Quincy Crew, just days after the organization announced the disbandment of the roster it fielded last season.

The new Chaos EC lineup will be rounded out by Jonáš “SabeRLight-” Volek and Ilya “IllidanSTR” Pivtsaev, who are on trial as the team’s offlaner and coach, respectively.

Quincy Crew started the season with superstar midlaner Sumail “SumaiL” Hassan among its ranks as their position-1 player, with his brother YawaR shifting to the offlane to accommodate him. However shortly after qualifying for the Dota Summit 11 Minor, Quincy Crew announced that SumaiL had left the team due to “fit issues.”

Despite losing world-class talent in SumaiL, the new Chaos EC lineup remains one of the most formidable teams in North America — with the trio of YawaR, Quinn, and MSS notably finishing in 9th-12th place with Newbee.

The organization hopes to “build off of that and provide them with the support they need to take their performance to the next level.”

“Coming into the 2019-2020 DPC season we wanted to field a North American roster and Quincy Crew came as a natural fit. They share a passion for winning and constant learning that is necessary to becoming a world champion team, and it is my belief that we can work alongside them to build an enduring Dota 2 program,” added Chaos EC General Manager, Jared Fletcher, in a statement.

The new Chaos EC lineup will be competing for the last spot at the MDL Chengdu Major at the upcoming Dota Summit 11 Minor.