Aster dropped only one game throughout the entire tournament. 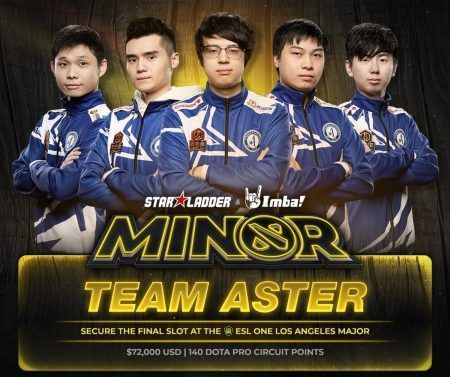 Team Aster dominated Alliance in the Grand Finals of the StarLadder ImbaTV Kyiv Minor 2020 to take the championship, the grand prize of US$72,000, 140 Dota Pro Circuit (DPC) points, and the all-important final slot for the ESL One Los Angeles Major.

With their win, Aster has become the second Chinese team to win a Minor this season and will now join the three other Chinese teams in Los Angeles to represent their region in the Major.

Meanwhile, Alliance fails to make it to a Major for the first time this season after finishing in the Top 8 and Top 4 of the last two Majors. They bow out of the Kyiv Minor as the runners-up with US$60,000 and 120 DPC points in consolation.

Here’s a breakdown of the Grand Finals:

Aster held a significant lead coming into the midgame which allowed them to secure a 19-minute Aegis for Sccc. A couple of pickoffs soon after gave them the confidence to push up the middle lane, but Alliance expertly pounced on Sccc just after his Aegis expired to win a fight and take Aster’s mid melee barracks 26 minutes in.

Aster held off further pushes by Alliance, picked off Nikobaby, and took their middle barracks at the 34-minute mark to grab control of the game. The Chinese squad’s teamfight superiority showed itself in the ensuing clashes, which allowed them to take the fight to their opponents’ Ancient and force the GG call after 37 minutes.

Alliance opted to take it late in game two, as Nikobaby was given his signature Medusa while Limmp was put on Dragon Knight, 33 on Mars, Handsken on Disruptor, and Fata on Oracle to back him up.

Aster countered with a strong midgame lineup that also had strong lategame potential with Sccc on Arc Warden, ChYuan on Storm Spirit, Xxs on Omniknight, Fade on Rubick, and BoBoKa on Vengeful Spirit.

Aster held the lead from minute one and never looked back, dominating the laning phase and never giving Alliance any breathing room.

Alliance tried to spread the map and make as much space for Nikobaby as they could, but that only played into Aster’s hands as the Chinese team racked up pickoff after pickoff to bolster their huge lead.

Despite Alliance’s best efforts to defend, Aster simply breezed to a quick 23-minute victory to take a commanding 2-0 lead in the series.

Aster deviated from their usual strategies in game three, going for a four-protect-one lineup with Sccc on Antimage, ChYuan on Shadow Fiend, Xxs on Mars, Fade on Shadow Shaman, and BoBoKa on Chen.

Meanwhile, Alliance looked to bounce back with a strong midgame lineup with a lot of pushing power with Nikobaby on Lifestealer, Limmp on Death Prophet, 33 on Dark Seer, Handsken on Nyx Assassin, and Fata on Jakiro.

The game started off with Aster looking like they were on the verge of sweeping the finals, as they were able to fend off Alliance’s early pushes while ensuring that Sccc was able to get free farm.

Aster won a huge fight at the 27-minute mark where Sccc bagged a Triple Kill that looked like it could have been a nail in the coffin. However, Alliance turned things around by taking down all three Aster cores in a clash just two minutes later, which allowed them to secure Aegis for Nikobaby and take two lanes of barracks by the 32-minute mark.

Alliance won one last decisive teamfight in the bottom lane to force the GG call from Aster after 38 minutes and avoid the sweep.

Alliance looked to keep their championship hopes alive with a strong teamfight composition in game four with Nikobaby on Faceless Void, Limmp on Death Prophet, 33 on Mars, Handsken on Winter Wyvern, and Fata on Oracle.

Aster wanted to close the series out with a Gyrocopter-Io combo for Sccc and BoBoKa, with ChYuan on Outworld Devourer, Xxs on Centaur Warrunner, and Fade on Shadow Demon to back them up.

Aster got off to another great start, which they used to exert almost full control of the map. While Alliance had potent teamfight ultimates, they were only able to use them to take objectives and pickoffs, but not in the full five-on-five engagement that they needed.

Alliance misplayed their contest of Aster’s Roshan attempt at the 26-minute mark, which allowed the Chinese squad to secure the Aegis for Sccc and win the ensuing teamfight. Despite Alliance’s best efforts to defend from there, Aster simply marched up to their Ancient and took it down after 32 minutes to secure the championship of the Kyiv Minor.

READ MORE: Alliance outlast Gambit in a 66-minute thriller to advance to the Kyiv Minor 2020 Finals