Killua carried both wins with his Troll Warlord. 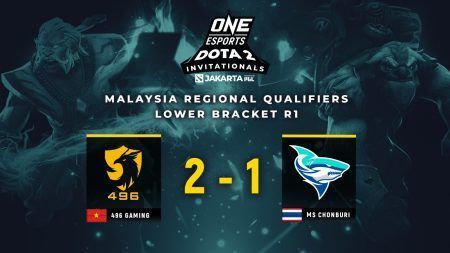 The final day of the ONE Esports Dota 2 Jakarta Invitational Malaysia Regional Qualifier kicked off with a Lower Bracket Semifinals series between Vietnamese squad, 496 Gaming, and Thai team, MS Chonburi.

496 Gaming picked up their two core heroes in Troll Warlord and Abaddon early in the draft and decided to go with a last-pick hard carry Riki.

Meanwhile, MS Chonburi went with a Spectre and Pangolier, along with a surprise last-pick Broodmother.

To the surprise of everyone, MS Chonburi’s Broodmother failed to make an impact all throughout the first game. Instead, it was 496’s Truong Quoc “Killua”‘s Nghia Troll Warlord that dominated the laning phase and gave 496 Gaming control of the game.

With MS Chonburi unable to apply any pressure on the early Dire towers, they fell behind in the net worth chart with Killua taking the top spot.

496 Gaming then pushed into the Radiant base and claimed the Mega Creep advantage. Killua’s Troll Warlord eventually focused down the Radiant Ancient ending the game at the 35-minute mark.

In game two, 496 Gaming decided to stick with the same lineup but instead of a Riki, they went with an Ember Spirit.

496 Gaming was prepared for MS Chonburi’s early aggressive plays, and rotated all of their heroes whenever the Dire team tried to contest their side of the map.

This didn’t hold MS Chonburi back from applying more pressure on 496 Gaming. They continued to push into the Dire side of the map and force frantic team fights that prevented 496’s cores from taking the gold lead this time round.

496 Gaming failed to find the right openings to regain map control. This gave MS Chonburi confidence to siege the Dire base and take key objective points and build up their lead.

MS Chonburi eventually finished the game at the 30-minute mark after they team wiped 496 Gaming.

For the third straight time in the series, 496 Gaming opened with a Winter Wyvern and Troll Warlord draft. They finished their lineup with the Viper, Disruptor, and Clockwerk.

The final game of the series was action-packed with both teams securing 25 kills before the 14-minute mark of the game. MS Chonburi continued to put pressure on 496’s side of the map, but Nguyen Thanh “Datbb” Dat was able to counter with a clutch Winter’s Curse ultimate in the middle lane.

Both teams tried to contest each other’s hero rotations and this caused multiple hero engagements around the map. At the same time, Killua’s Troll Warlord was able to secure the top of the net worth chart and began to ramp up his farm.

After a few more hero skirmishes that went the way of 496, the team began sieging the Dire base behind Killua’s massively farmed Troll Warlord.

MS Chonburi was unable to find the proper initiation plays with 496’s Clockwerk controlling the Dire heroes during team fights. 496 eventually eliminated all of MS Chonburi’s heroes, closing out the game, and eliminating the Thai team from the tournament.

With their 2-1 victory, 496 Gaming advances to the Lower Bracket Finals where they’re set to rematch against Reality Rift in a best-of-three series for a place in the Grand Finals.

Meanwhile, MS Chonburi end their qualifier run with a fourth-place finish and earn US$800 for their efforts.