Enno is the fourth Dota Underlord to grace White Spire

It’s all about the poison with this creature. 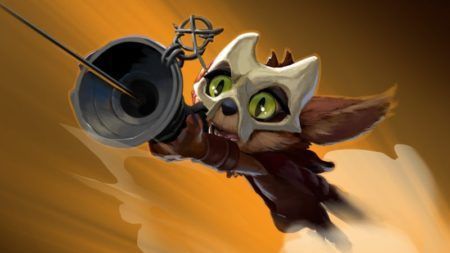 Enno, the Scavenger King, has arrived in Valve’s auto battler Dota Underlords and he’s got some dirty tricks up his sleeve to help him conquer the White Spire.

As the fourth Underlord to be released, this little ranged creature has the ability to roam around the board and poison his enemies.

His passive skill Escape Artist, lets him get away from danger by reappearing somewhere else on the board.

He also has an ability that stuns adjacent enemies when he takes damage.

The Healin’ n’ Stealin’! build makes Enno leap and shoot poison to the opponents across the board, all while healing adjacent allies.

Later on, it steals the lowest tier item from the enemy crew at the start of the game. The quality of the loot gets better whenever an enemy dies within Enno’s range. It is to be noted that all items return to its original owner by the end of the combat.

On the other hand, the Rabid Furball build is a pure damage build, and applies a stack of poison, and can even stun nearby enemies.

To coincide with Enno’s arrival to the game, a new status effect has been added to Dota Underlords called Poison:

The hero Venomancer now applies poison to its targets, while the item Orb of Venom now gives poison to enemies instead of applying damage.

This will be the last major update before Dota Underlords comes out of Early Access and officially launches Season 1 on February 25.