The opening of Super Nintendo World has been delayed indefinitely Super Nintendo World was originally set to debut this summer season, but because of the COVID-19 pandemic USJ has decided to delay its launch. USJ is aware of potential social distancing problems that may arise should the attraction follow its original schedule.

Fans should watch out for a formal announcement, which is expected to drop within the week, which might reveal information about Super Nintendo World’s new opening date, according to Business Times.

Universal Studios Japan has already re-opened its doors to annual pass holders and Kansai studio pass holders following Japan’s lift on its state of emergency status. However, park attendees are required to wear face masks and practice social distancing as a part of USJ’s safety protocols.

Construction of the Super Mario Bros.-themed attraction looks almost complete, based on aerial shots of the location that surfaced last month. 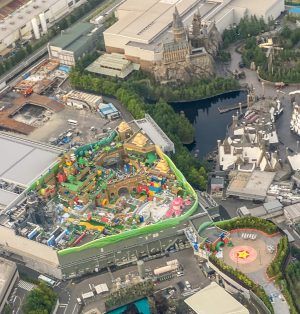 Super Nintendo World will be located next to The Wizarding World of Harry Potter attraction, with standout features like colorful blocks and humongous pipes. It already has two confirmed rides named Mario Kart and Yoshi’s Adventures.

A set of smart wristbands called Power Up Band will give park attendees an interactive experience by keeping track of scores and virtually collecting items when paired with a smartphone app. These bands will be available for purchase.

An update by Attractions Magazine showed how some Super Nintendo World’s features would turn out during nighttime, with glowing ? blocks and gleaming red eyes from the dragon on Bowser’s castle.