The showbiz darling recently shared photos of her graduation shoot, where she confidently posed with her smartphone that was running Call of Duty Mobile.

Sharlene is no rookie to the world of gaming. She streams Call of Duty Mobile four days a week on her Facebook page, and even appeared as a combat-ready Operator in the game’s Season 3 live-action trailer.

The Goin’ Bulilit actress took to social media to celebrate her graduation and show just how much COD Mobile means to her. In the graduation photos that she shared, Sharlene displays the home screen of the mobile FPS, a familiar sight for many of her fans.

The 23-year-old captioned the photos with an inside joke for COD Mobile players, saying that she’ll “slide-jump” to her graduation.

With the Philippines still not allowing in-person academic events, the gaming personality took matters into her own hands. In a recent stream, she dressed up in a toga and walked to a remix of the graduation song.

“This is how you graduate in 2022. I will wear this outfit for one week,” said Sharlene.

While she normally plays on her phone, the actress also has a gaming PC that she uses for her weekly streams.

In her gaming setup vlog, she revealed the parts used in her PC: An AMD Ryzen 5 processor, a Gigabyte GeForce GTX 1660 Super graphics card, and an ASRock B450M Steel Legend motherboard.

Another fun fact: Sharlene actually defended her thesis on the same gaming rig. 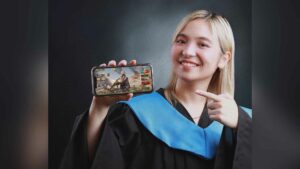