He’s definitely an insta-ban in ranked. 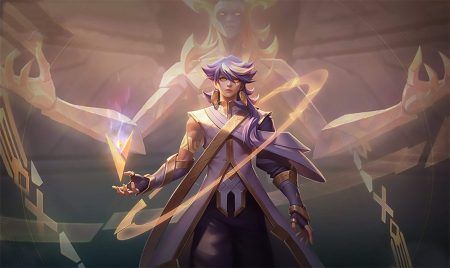 A glowing playing field awaits Arena of Valor players as the game’s latest hero, Bright, has finally landed on the test servers.

Out of all of AoV’s heroes, Bright’s appearance stands out with his white and purple spiky hair that matches his yellow-colored eyes. Players can easily identify him in the Arena with his pure white robes that go nicely with his golden weapon.

Bright’s giant sword also transforms into a spear as a part of his skill set.

Bright is a marksman/warrior hero, ideally played either on the Abyssal Dragon lane or on the Dark Slayer lane.

Passive – Players can automatically switch between his two weapons. Use the sword for aggressive, melee attacks while they can also throw their spear for long-range attacks. Additionally, each long-range auto-attack will mark the player with “Lights” which lets Bright deal more magical damage if he switches to using his sword immediately.

First ability – After throwing a light wave, Bright dashes towards a direction then throws a spear. This ability also gives multiple effects like slowing the enemy, gaining brief vision over them, and marking them to be combined with Bright’s second ability.

Second ability – Bright flashes towards the target and then buffs his attack speed by 50%. When attacking a marked hero, Bright can reset the cooldown timer of his second ability, where players can utilize its three-second healing effect by doubling it in a short period of time.

Ultimate ability – Bright transforms into a holy soul where he’s technically invulnerable for three seconds. Once the timer has passed, all the damage that he was supposed to receive during those three seconds will be applied. If the player was able to kill his target enemy, the damage taken will not be applied.

Bright has just been released on the Arena of Valor test servers, so do expect his kit to undergo further balancing. Could Bright be the mysterious hero referred to in this diagram as one of Zata’s friends?