A new hero and quality of life improvements all around. Arena of Valor (AoV) is welcoming some big changes that will affect several aspects in the game, thanks to its June update. The latest patch features key quality of life improvements, a revamped reporting system, a new hero, and notable balance adjustments of players, items and runes.

Read all about these changes in our roundup below: 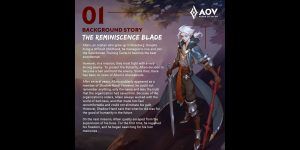 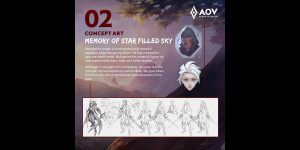 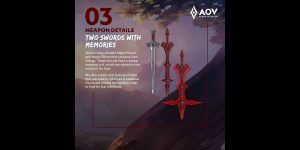 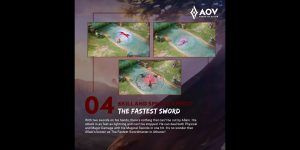 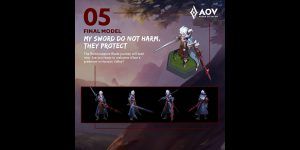 The latest hero to join AoV’s growing roster is the dual-wielding swordsman Allain. Boasting extraordinary sword skills, Allain is a force to be reckoned with in one-on-one battles.

Allain’s passive skill is called Howling Sword while his two primary skills are Meteor Strike and Moonflash. His ultimate is called Death at Sunset.

The orphan turned master swordsman also has a history with the deadly assassin Butterfly. When both of them are on the battlefield, they can unleash a devastating attack that will destroy anything that stands in their way.

Allain serves as the base hero for the Sword Art Online character Kirito who entered to the world of AoV during the recent crossover event on June 23.

Tencent has revamped AoV’s reporting system with a more user-friendly interface. The game now has a customer service report channel where players can directly file their complaints. Each report made by players will be gathered and displayed on the game’s Report and History page.

Also, Tencent has now classified the act of players helping opponents as a negative game behavior. Finally, you have a legitimate reason to report on teammates that are not playing the game the right way.

The developers of AoV have been pretty serious about ensuring that every player has a good experience within the game. The latest among Tencent’s measures to discourage bad behavior is AoV’s new Behavior Score system, which ranks players based on how well they are liked or disliked by others within the game.

Each player starts with 100 points. Points are added each time they get a ‘like’ by other players after a match. Conversely, they lose points when other players report them. Points are then calculated to rank players within the system. Those that score highly will be rewarded while those that frequently get reported will be penalized.

As of writing, there are still no details from Tencent about what rewards await players who behave well and what penalties will befall those who don’t. 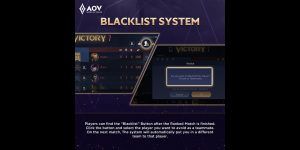 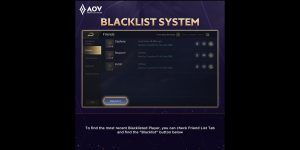 Apart from the Behavior Score system, Tencent has also implemented a Blacklist system that allows players to avoid teaming up with misbehaving players.

By clicking on the button, you can select players that you want to avoid teaming up with in future matches. Once done, the system will place the players on a different team from the blacklisted player.

According to the developers, players can register up to four players on the blacklist, which appears under a new button within the Friend List Tab. Should they add a fifth blacklisted player, that fifth entry will replace the first entry.

AoV will make life uncomfortable for blacklisted players as their queue ranked match time will be affected when they are reported by multiple players.

It should be noted that only players who are not friends with you can be added to the blacklist. Adding to that, the system only applies to 30-star conqueror ranked and below (Master, Diamond, Platinum, Gold, Silver, and Bronze included).

Express yourself with the new Emoji system

[AOV June Update 2020] – Emoji SystemEmoji System will be coming soon to the latest AOV Update in June 2020. By using this new feature, you can express yourself more when playing and replace boring text to communicate with other players. Not only that, you can also show your Hero Mastery Level.For those of you who might not know, you can equipped the Emoji in Hero Customization. This Emoji can be set automatically when you get First Blood or Multi-Kill (Triple Kill, Quad Kill, and Penta Kill).#GarenaAOV #ArenaofValor #傳說對決 #Lienquanmobile #ROV #AOV #Games #Moba #ShadowHand #KazellCity #JuneUpdate #EmojiSystem

Now for something more fun and positive. Emojis: Who doesn’t love them? They are a great way to liven up interactions with other players instead of boring old text. The new feature will open up new ways you can express yourself as well as show off your Hero Mastery Level.

So how do you find Emojis within the game? Just go to the Hero Customization options and set your favorite Emoji to activate whenever you get First Blood, Multi-Kill, Triple Kill, Quad Kill, and Penta Kill. 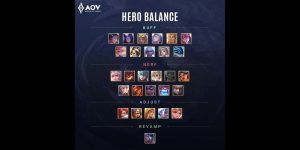 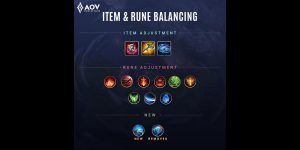 Last but not least, the latest update also brings balance changes to the heroes, items, and runes, as shown in the gallery above. To see the full details of the balance changes, click here.

There will also be new Support Items and a new Rune named Enhanced Healing. As the name suggests, the Rune will restore your HP. It also restores your MP as a bonus. Once you have set it, it will replace the ‘Restore’ button in the game.