They will be representing Thailand in the 2020 Arena of Valor World Cup. 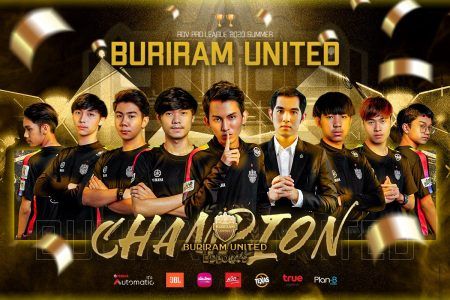 BRU effortlessly took the lead in the series 1-0 with about 9000 gold lead in just 12 minutes.

Game two was closer, with both teams fairly even until the late game when Bazaar Gaming made a crucial mistake in a team fight, which cost them the second game. With 12 kills under 11 minutes this time, Buriram United Esports took the 2-0 lead.

Game three once again saw Buriram United Esports dominate from the start, as they continued to play sharp and extend their lead. They destroyed BZ’s nexus with eight towers down and a 10,000 gold lead.

On the brink of elimination, Bazaar Gaming finally managed to turn things around in game four as they took First Blood, killing Anurak “Nutalomlok” Saengjan’s Marja. They were able to build on their momentum from there and took the game after taking down seven towers in just 13 minutes, finally getting themselves on the scoreboard.

Building on their momentum, Bazaar Gaming put in another strong showing, and snowballed an early lead into a convincing match win.

They crushed Buriram United Esports with a 10-2 kill score with Pasu “Erez” Yensabai’s Maloch taking the MVP of the game with an 80% kill participation.

Bazaar Gaming again started strong in game six as they looked to even up the score. While Buriram were able to score First Blood, catching Bazaar Gaming off-guard in the jungle, Bazaar immediately bounced back, winning the team clash and taking down three members of BRU.

However, BRU were able to recover and gambled the game on some aggressive plays that ended up paying off.

With eight of Bazaar’s towers down, and a 5,000 gold lead, Buriram went for the kill, pulling off an astounding Ace to close out game six, taking the series 4-2, and with it the championship.

With this win, Buriram United has made history as the first team to win the RoV Pro League twice.