Arena of Valor Beginner’s Guide: Tips and strategies everyone should know

Become legendary in the Arena.

Tencent Games and Garena’s multiplayer online battle arena (MOBA) game Arena of Valor (Honor of Kings in China) is highly popular in Southeast Asia, and a lot of people have been playing it on their mobile phones and consoles.

For new players, we have prepared this guide to learn the basics of a Classic 5v5 match in Arena of Valor. From heroes and their skills down to the game’s economy — we’ve got you covered.

The main goal of Arena of Valor’s Classic 5v5 mode is to destroy each other’s base. The team who accomplishes this first, wins.

A team consists of five players with different roles.

The game’s controls are simple and straightforward. On the lower left side is the joystick, which is used to move heroes towards any direction of your choosing.

The lower right side is picture of a clenched fist, your ‘normal attack’ button,

Located above the normal attack button are your hero’s skills. The skill directly above the attack button is the hero’s ultimate. As the player gains experience and levels up, an upgrade (+) button will appear right above the skills that you can press to upgrade.

Sending signals or pings is also possible in AoV. Simply tap on the area of the map to send one.

Map and the brush

The classic map consists of three lanes, with brushes, the jungle and towers in between.

Hiding in the brush grants players a vision share effect, which means that teammates would be able to share your vision of an enemy hero.

Each side has a total of nine defense towers, three in the top, middle, and bottom lane. Tier 1 towers are furthest from the base, while Tier 3 towers are those located within the base.

On the team’s base lies the core (sometimes called the nexus). The first team to destroy the core wins the game.

There are five main jungle monsters in AoV.

The Abyssal Dragon evolves to the Enraged Abyssal Dragon after ten minutes. Defeating its enraged state grants different buffs according to the hero’s primary roles.

Additionally, killing the Dark Slayer will enable players to summon the Drake, which can be utilized to push and destroy towers. Located in the top lane, the Dark Slayer spawns every five minutes starting at the eighth minute mark.

For monsters that give buffs, downing Spirit Sentinel grants the player 50 HP regeneration per second and 20 bonus movement speed for a minute.

Recommended for mage heroes, defeating the Sage Golem will give players 20% cooldown speed and 2% mana regeneration per second for a limited duration.

For heroes that want to execute early game ganks, it’s a good idea to first secure Might Buffs, which come from killing Might Golems.

Might Buffs reduce enemy movement speed whenever a normal attack hits, and deals extra burn damage to the enemy.

Melee, ranged, and siege are the three types of minions in the game.

Melee minions are the tankiest, while the ranged minions have less HP and deal more damage. Siege minions are minions who ride a vehicle. They are the strongest, and have a high amount of health and damage. Last-hitting minions (delivering the killing blow) grants players more gold.

Jungle monsters give off different amounts of gold, as their bounty increases with game time.

Gold gained can be spent on different items to strengthen your hero’s statistics. There are over a hundred items to choose from, divided into attack, magic, defense, movement, jungling, and support categories.

Players start with 300 gold and can purchase starting items like Short Sword for +20 physical attack, Spell Tome for +40 magic power, Ring of Vitality for +300 Max HP, boots for extra movement speed, and even Wind and Water stones for gold and mana regeneration.

From mid to late game, you would want stronger items which are also more expensive, like the magic power item Holy of Holies for mages or Fenrir’s Tooth to increase physical attack.

Most items in the game are passive — meaning if you equpi them, they automatically give you the additioanl stats — but some like the lifesteal item Bow of Slaughter and the damage immunity item Arctic Orb, need to be activated to utilize their effects.

A player can equip a total of six items. A Quick Buy option will appear on the top right area of the player’s screen for recommended items or pre-ordered items.

Each hero has one passive skill and three active skills, including their ultimate.

Passive skills grant heroes additional stats. For example, Arthur’s Paragon gives him 88 armor. There are also passive skills that require certain conditions to be fulfilled, like Lindis’ Tread Softly which temporarily increases her movement speed and strengthens her normal attack whenever she passes through a brush.

Meanwhile, active skills can be cast depending on the situation, and have an average 10-second cooldown. Some skills have longer cooldowns, especially those do not require the use of mana. Skill effects vary from buffs, crowd controls, heals, movement, to damage and damage reduction.

The third skill is the strongest in a hero’s kit, and it is called the ultimate skill. Ultimates have longer cooldowns and can turn around the results of teamfights when used in the right situation at the right time.

AoV players start the game with one active skill. As players gain experience and level up, they gain a skill point that can be used to strengthen other skills.

Talents are abilities that sustain heroes during battles. Talent cooldowns range from as short as 30 seconds to as long as 120 seconds.

Talents unlock as players level up their AoV accounts. The last talent, Flicker, unlocks at level 17. 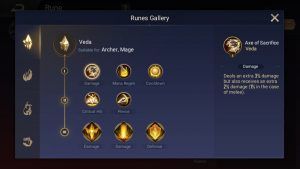 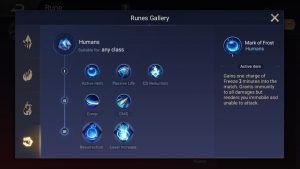 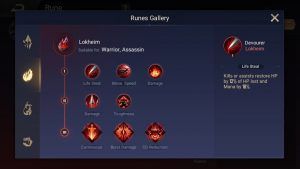 These magical stones called Runes enhance heroes’ skills from various aspects. Depending on the players’ style and equipped hero, Runes can be combined and customized.

At least four types of Runes exist in AoV.

This rune magic line is suitable for ranged heroes like archers and mages.

Take this rune if you are playing as melee, warrior, or assassin.

Suitable for almost all types of heroes in AoV.

Later on in the game, the concept of Arcanas will be introduced to players at player level 7 and will be added to the Armory alongside items, talents, and runes.

Arcanas are attributes that improve the base statistics of your hero. There are three types of Arcana:

Arcana attribute levels range from I to III, III being the highest. The higher the level of the Arcana, the greater are its bonus effects to heroes.

Having Arcana bonuses make a big difference during the early minutes of the game. Arcana can be bought in the shop or obtained through achievements.

To date, there are a total of 100 heroes to choose from in Arena of Valor. These heroes can be categorized into six roles: Tank, warrior, assassin, mage, archer, and support.

Aside from the tutorial hero Valhein, we recommend the warrior Arthur for beginners because of his versatility and newcomer-friendly kit.