Thailand avenged their loss in the Upper Bracket Final to defeat Indonesia in the gold medal match. 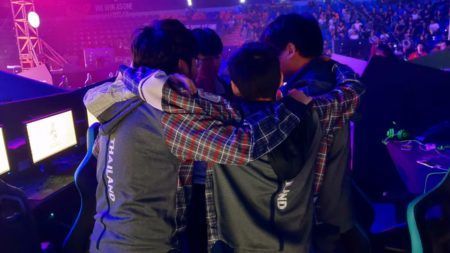 In the gold medal match of the Arena of Valor tournament at SEA Games 2019, Indonesia’s EVOS Esports took on Thailand’s Workpoint Fighting Fish.

The game was a rematch of the Upper Bracket finals, which Indonesia won 2-1.

Thailand dominated the first game, easily taking down Indonesia’s towers while keeping all of theirs up. Natpakan “BlueNoPing” Chaisiri’s Quillen took most of the team kills, picking off Indonesian members in team fights.

Thailand team captain, Ratthagun “Gzy” Suwanchai on Zip, had a phenomenal game. In this clip, while Thailand pushes into Indonesia’s base, he swallows the drake to save it from death, then spits it out to help sustain Thailand’s push, helping them win the game.

In game two, Indonesia got off to a good start, with Hartawan “Wyvorz” Muliadi’s Florentino getting the first blood.

Team Indonesia was able to push towards Thailand’s bottom lane outer tower, but Thailand’s stellar defense held them at bay and managed to turn the tide.

Thailand immediately went on the counterattack and split-push towards Indonesia’s base. A few picks later and Indonesia were unable to defend their base, letting Thailand finish off game two in just 14 minutes.

Both teams started game three by trading blows. However a crucial clash at the 6-minute mark saw Indonesia go for a 3v1 gank, but Thailand were able to arrive in time, turning the fight into a 3v3. While Indonesia managed to destroy Thailand’s bottom lane tower, they lost two members in the process.

With no-one left to defend, Thailand steamrolled into Indonesia’s base and picked up their third straight victory, ending the series 3-0 and winning the gold medal.