The toast of the town. 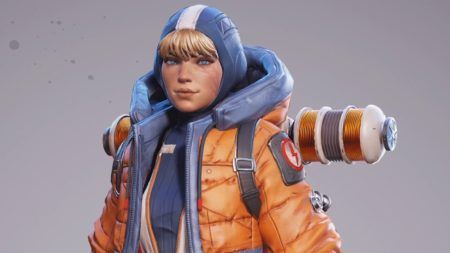 The next season of Apex Legends will be called Battle Charge and it starts on July 2.

The centerpiece of the season is a new Legend called Wattson, a young French inventor who, along with her father, helped design and create the Apex Legends arena.

Wattson offers a different style of play from the run-and-gun offense of most legends, favoring a more defensive strategy that will reward careful planning. Her tactical ability is a deployable Electric Fence that will damage enemies that try to walk through it (don’t worry, her teammates will be able to pass through safely). She can use this for area denial or to provide a safe retreat for her team.

Her ultimate is called Interception Pylon, and it’s essentially an anti-air turret that will shoot down any incoming projectiles including Gibraltar and Bangalore’s ults, as well as incoming grenades. Shooting down projectiles also recharges her tactical. Finally, her passive lets Ultimate Accelerants fully recharge her ultimate.

Wattson will be available to all players (the Battle Pass is not required) for Legend Tokens or Apex Coins.

Season 2 will also introduce a new gun: The L-Star light machine gun. The gun is a gold-class legendary weapon like the Kraber .50-CAL and Mastiff and will only be found in supply drops. Like the other two legendary guns, it uses a unique ammo type that cannot be replenished.

The L-Star has a 60-round magazine and comes with 180 rounds. While it does a ton of damage and fires extremely fast, sustained fire causes it to overheat.

A new Ranked Mode will also be coming to Season 2. The mode will include skill-based matchmaking and six ranked tiers, starting at Bronze, and going all the way up to Apex Predator. At the end of the season, you’ll get rewards based on the highest tier you achieved.

Finally, Respawn also acknowledged that the reception to Season 1 was disappointing but that it will be making changes for Season 2. Battle Charge will include both daily and weekly challenges, similar to the ones in Fortnite, which will help you grind out Battle Pass levels. Filler reward levels that gave badges and stat trackers have also been removed in favor of new content, and you’ll also be able to earn more crafting materials so you can make the skins you actually want.