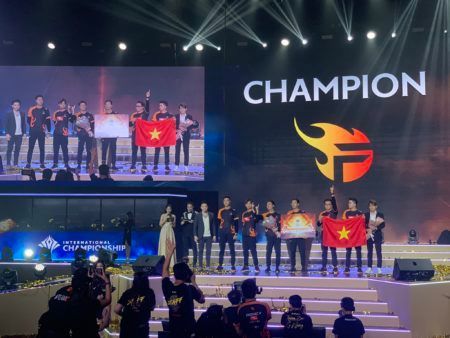 With the victory, Team Flash is indisputable the best AoV team in the world, as the same squad also won the AoV World Cup earlier this year while representing Vietnam.

In a span of 12 minutes, Team Flash took their first series victory against Buriram United Esports. Team Flash took down six towers and had a total of 11 team kills by the end of the match.

Team Flash played another methodical game as they took down Buriram United Esports one by one, leaving the nexus unguarded for the Vietnamese team to take.

With seven towers and a 7,000 gold lead, BRU lost their last fight after Overfly and Parit “Difoxn” Pornrattanapitak got caught in the bottom lane.

With all the momentum on their side, Team Flash continued to dominate, winning teamfight after teamfight. Đỗ “Elly” Thành Đạt had a huge game on Capheny, racking up kill after kill.

They finished the game in a quick nine minutes destroying seven towers and picking up ten kills.

However, Team Flash would not be denied and took the series win in game five. BRU’s Watchranun “Summer” Thaworn’s Superman had a strong final game, but it wasn’t enough to save his team, and in the end the Vietnamese squad were able to close out the series 4-1.

Buriram United Esports won US$110,000 for their second-place finish.