The Colonel has never looked this good. 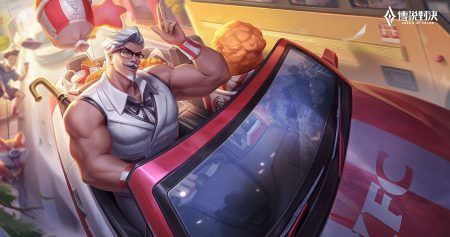 After testing the waters with its very own dating simulation game, KFC is jumping into the deep end with the reveal of a new Colonel Sanders skin for Arena of Valor.

The collaborative skin is for Ormarr, and is appropriately armed with a giant fried chicken drumstick and a hardy walking cane.

Here’s a video of the good Colonel himself in the character selection screen and gameplay:

So how do you unlock the skin?

Unfortunately, the skin is only available in KFC outlets in Taiwan. Additionally, it’s not a guaranteed drop.

Players will need to buy the 金沙富貴脆雞 combo meal, which literally translates to luxurious/golden sands chicken, from any Taiwanese KFC branch.

Each meal comes with a “virtual treasure card” with a 40% chance to get the Colonel Sanders skin as a reward.