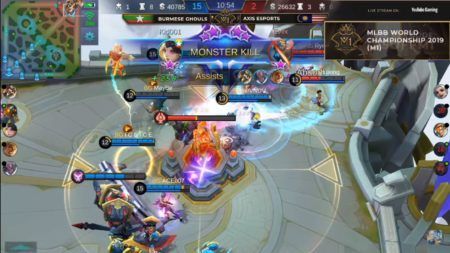 Here’s a recap of yesterday’s Group Stage B action, featuring the following teams:

The Burmese Ghouls beat Malaysia’s Axis Esports in two straight matches with Kid001 leading the way in both games.

The two-time MPL-Myanmar champions hit the ground running in their very first game of the tournament, downing two turrets less than three minutes into the match.

The combination of ACE007’s Bruno and Kid001’s Chang’e sustained heavy damage in favor of the Ghouls, with PVNDV’s Jawhead and MayBe’s Grock providing effective crowd control and support.

Game two was another one-sided affair, ending with a 15-2 score for BG. BG played aggressive right from the start to earn a 5-1 kill count — including two turtles and two turrets — in the first five minutes. PVNDV used Jawhead to effectively guard Lacid’s Masha, preventing the Axis side from pulling off a segue.

Axis Esports immediately bounced back from their defeat to BG, and took down US-based Team Gosu in quick fashion.

In game one, AE’s Evilx and Rynn unleashed a deadly Grock-Lunox combination with Evilx anchoring Axis’ defense and using excellent crowd control to enable his teammates to push for objectives and win team ganks. Axis took game one handily with a score of 16-2.

In game two, Team Gosu tried to prioritize turtle kills, but the strategy backfired. With their skills all used up, Axis dominated the team fights and easily downed Gosu’s towers. In the end, it was 13-5 in favor of Axis, earning the Malaysians a clean sweep.

The third series of the day saw another dominating performance from the Burmese Ghouls as they faced off against Candy Comeback from Laos.

In the first game, the squad from Myanmar flexed their way towards a 23-3 result in just nine minutes and 39 seconds.

Kid001’s Lunox led the way in kills while MayBe showed off expert use of Kaja’s ultimate “Divine Judgment”, giving BG an effective enabler toward a dominating victory.

Towards the end, PVNDV also played a key role in countering Candy Comeback’s split push while effectively blocking enemies during the four-man clash setup, and throwing enemies to allies for the kill.

In both matches between Candy Comeback and Team Gosu, the Laos squad took an early lead, before the US team rallied to make a late game comeback.

In game one, Candy Comeback’s TomZ’s Valir, Bisler’s Lunox and TonMVP’s Kimmi led the charge, getting Candy Comeback off to a great start. But Team Gosu turned the tide when they stole the Lord from Candy Comeback with Basic’s Esmeralda landed the killing blow, giving his team an epic comeback win.

Game two started with both teams taking a more defensive stance. Candy Comeback positioned for an early game advantage with Bister’s Chang’e, TonMVP’s Kimmi, and NoRz’s Xborg dealing major damage. But Team Gosu once again swung the momentum to their side, this time by banking on General’s Granger’s late-game advantage over TonMVP’s Kimmi to secure the victory.

In game one of the day’s fifth series, Team Gosu rallied to an early game advantage, securing gold and kills in the first six minutes. But as the game went on, the Burmese Ghouls’ two-tank setup —  featuring ICE ICE’s Baxia and MayBe’s Hylos — along with PVNDV’s expert maneuvering of Jawhead slowly disabled Gosu’s attacks, letting the Burmese Ghouls eventually claim victory.

BG then turned to an aggressive early game strategy in the second game, forcing Team Gosu to turn their attention to Kid001’s Harith. This freed up ACE007 to secure items for his hero Bruno, which paid off during the team fights. Gosu was rendered defenseless against Bruno’s attacks, earning ACE007 two Maniacs, and a sweep for the Burmese Ghouls.

In the last match of the day, Axis Esports needed just one game to clinch their slot in the M1 2019 playoffs round. Facing off against Candy Comeback, the Malaysians quickly asserted themselves, racing to an 11-minute, 20-5 game one win.

With both teams fates already sealed, game two was meaningless, and with Candy Comeback clearly already eliminated and demoralized, Axis needed only a little over eight minutes to wrap up another dominating performance.

With a 3-0 record, the Burmese Ghouls took first place in Group B, and will now proceed to the Upper Bracket of the playoffs where they will face the winner of Group D.

Axis Esports took second place with a 2-1 record, and will proceed to the Lower Bracket and face off against the second-place finisher of Group D.

Team Gosu and Candy Comeback have been eliminated from the tournament.