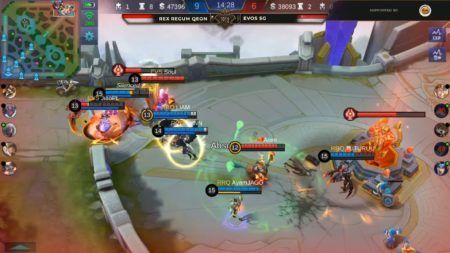 The Mobile Legends: Bang Bang M1 World Championship is now underway, with the best ML teams in the world competing for its US$250,000 prize pool.

Indonesia’s Rex Reum Qeon got their M1 campaign off to a great start with a convincing 2-0 sweep over EVOS Esports SG in the first match of Group Stage A.

EVOS was clearly overmatched, and their team chemistry was no match for RRQ’s. RRQ’s Liam was a standout on Baxia, tanking a ton of damage and letting the rest of RRQ take down towers with ease. In game two, RRQ’s Vynn also managed to steal the Lord in the final minutes of the game, shutting the door on EVOS’ only hope of a comeback.

RRQ had another great run against Vietnam’s VEC Fantasy Main. Although VFM was able to sneak a game win into the series, RRQ dominated in the final minutes of the third game.

As VFM attempted to take down Lord, RRQ rushed in for an interruption.

With all of VFM grouped up, RRQ took the advantage to lay down some deadly damage.

Although VFM’s Broly tried to backdoor ad the clash went in RRQ’s favor, and RRQ’s Vynn made his way back to base as a cautionary line of defense. With three members of VFM dead, RRQ went straight to the undefended inhibitor for the series victory.

After their disappointing performance in their first match against RRQ, EVOS managed to redeem themselves in their series against Cambodia’s Impunity KH.

EVOS dominated the first game, and by the 20-minute mark, had three more kills than IMP and went for the Lord to help finish the game. IMP did their best to steal the Lord, but EVOS’ Acee landed a strong skill shot to finish it off. With nowhere else to go, EVOS took IMP one-by-one as they retreated back to their base.

Game two was another strong showing from EVOS, and they took the lead early and never let up. In their last and final engagement near Lord’s pit, EVOS’ Soul’s Badang unleashed a rain of punches on IMP, taking down Paragon.

With the numbers advantage, the rest of EVOS invaded IMP’s base through the destroyed top lane and finished the series, 2-0.

VFM also managed to redeem themselves in their game against IMP. In the first game, VFM dominated map movement, taking down all of IMP’s towers and leaving them sitting in their base. With an immense 20,000 gold difference, the Vietnamese team closed out the landslide victory in less than ten minutes.

VFM entered the second game with a more reckless attitude, focusing more on kills and ganks rather than securing their lanes.

VFM’s TiNee had an amazing run as X.Borg, claiming seven kills with no deaths, and by the eleven-minute mark, VFM was ahead by 17 kills. They claimed a few more kills, before mercifully finishing off IMP by taking down their inhibitor.

This was probably the closest match of the day, with both teams looking evenly matched. EVOS pulled out their A-game for game one, leaving no room for mistakes. In the last clash, OhDeerBambi unleashed a devastating Meteor Shower that granted him a double kill and let the rest of EVOS capitalize to secure victory.

However, VFM made a swift comeback in the next two games, relying on Broly and TiNee as their front-line for damage. TiNee made a crucial play in the final deciding game, getting a solo kill on EVOS’ Soul at the last minute, and giving his team an advantage to push into the inhibitor.

With one more clash inside the base, VFM took their second game win in the group stage, qualifying for the next round.

The last game of the day saw the strongest team of the group playing the weakest team. Unsurprisingly, this match did not end well for the Cambodian squad.

While IMP was able to hold up in the early minutes of game one, RRQ simply stuck to their map rotation-heavy playstyle and easily secured victory with 14 more kills and a 20,000 gold advantage.

IMP actually played quite well in game two, and racked up 14 kills to RRQ’s 18. However, IMP eventually had their backs against the wall thanks to RRQ’s superior lane-pushing and by the 14-minute mark, RRQ and Lord stormed the lone inhibitor to finish the series.

With a 3-0 record, RRQ took first place in Group A, and will now proceed to the Upper Bracket of the playoffs where they will face the winner of Group C.

VFM took second place with a 2-1 record, and will proceed to the Lower Bracket and face off against the second-place finisher of Group C.

EVOS Esports SG and Impunity KH have both been eliminated.