RIP to the game mode that we never played. 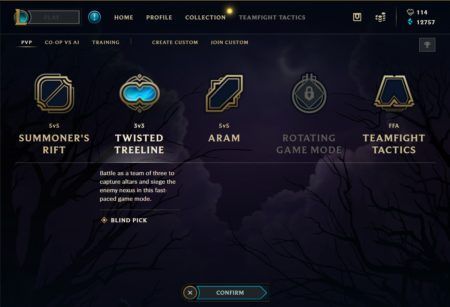 The Twisted Treeline, one of League’s original alternative game modes, soon be gone from the game client.

The main reason it’s going is pretty simple: The 3v3 game mode lacks players despite the additional items, balance updates and that Riot did back in 2012.

“This small population leads to long queue times, poor matchmaking, and ultimately an unsatisfying PvP experience for many of the players who do queue up for Treeline.”

With this in mind, Riot Games has decided to ultimately retire the game mode.

The Twisted Treeline will only be available later this year until the end of League of Legends season 9. Summoners can still queue up for the mode to earn end-of-season rewards.

This announcement was made in Riot Games’ latest dev blog entitled “State of Modes“, which mainly tackled the other game modes in League.

Teamfight Tactics, Riot’s own take on the auto-battler genre, is now permanent and will continue to be improved by the team.

Riot also promised more All Random Ultra Rapid Fire (ARURF) for all players before the year ends. The same goes for Nexus Blitz, an experimental mode that released last year.

Lastly, the All Random All Mid (ARAM) mode will feature “bigger changes once a year or so”.