Dragon X is right behind them in a tightly-contested opening week in the LCK. 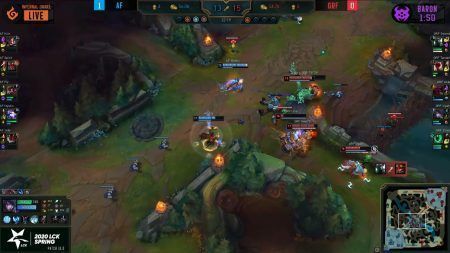 League of Legends Champions Korea has wrapped up its first week with some incredible performances from Korea’s finest League players.

Match of the Week: Afreeca Freecs vs Hanwha Life Esports

Our pick for the best match of the week goes to the thrilling back-and-forth between Afreeca Freecs and Hanwha Life Esports.

Although Hanwha claimed the first game with noticeable mistakes from their opponent, Afreeca soon came back with a reverse sweep.

In game two, with a better team composition and a slower pace in mind, AF focused on map domination rather than kills, wiping out HLE’s outer-base towers. With the map on lockdown, Afreeca flanked their opponents for an ace and secured a tie on the scoreboard.

Afreeca proceeded with the same gameplan into Game 3. At a slower pace, the team was able to generate a significant gold advantage with tower breakdowns and a 23-minute Baron rush.

With constant split-pushing and fulfillment of map objectives (Baron and Dragon Soul), Afreeca easily overtook Hanhwa Life with one final push to the Nexus.

AF’s Spirit was the difference-maker in the third game of AF’s match against Hanwha Life. With an unorthodox jungle pick of Karthus, he was able to bring tons of damage (23,100 approximately) to his enemies and provide his teammates with well-timed crowd controlling.

Although he maintained a safe distance away from most fights, his Reqiuem ultimate was the designated kill-confirm for the quick scrimmages in the other lanes. By the ending phase, Spirit became a make-shift marksman alongside Aphelios with his Wall of Pain to Lay Waste combo.

Gen.G and Afreeca Freecs begin the Spring season with a strong 2-0 standing. Dragon X is right behind them with a 2-0 record but the team dropped a game in both of their matches, bumping them down to second place.

Fan favorites T1 are in a current four-way-tie for third place with Hanwha Life, Damwon, and SANDBOX while kt Rolster, APK Prince, and Griffin are at the bottom of the leaderboard.