‘King of NA’ Tactical wins LCS Rookie of the Year

A superstar in the making. 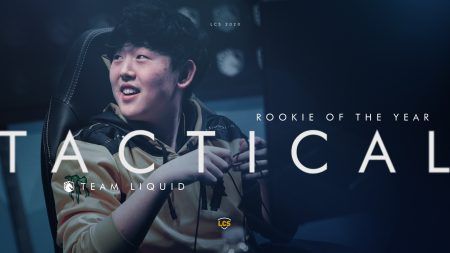 The LCS has named Edward “Tactical” Ra of Team Liquid as the league’s Rookie of the Year.

Despite only fulfilling his role as a regular starter in the Summer Split, Team Liquid saw significant improvements when the young player took over after the mid-year departure of ADC superstar Yiliang “Doublelift” Peng.

Tactical held up an impressive showing amongst some of the league’s greatest players. By the end of the regular season, the 19-year-old player finished fourth in kills (67) and tied with Doublelift in creep score per minute (9.9).

As a new and improved team, Team Liquid redeemed themselves from their lackluster Spring appearance and ended the summer season as league leaders, beating out big names like TSM and Cloud9. With their significant rise in the ranks, Team Liquid also won the award for the best Coaching Staff of the Split.

Tactical and Team Liquid will be facing off against TSM in the lower bracket finals on September 6 at 4 a.m. (GMT+8).