Legends of Runeterra Beginner’s Guide: Tips and strategies everyone should know

Learn how to deal your cards like Twisted Fate himself. 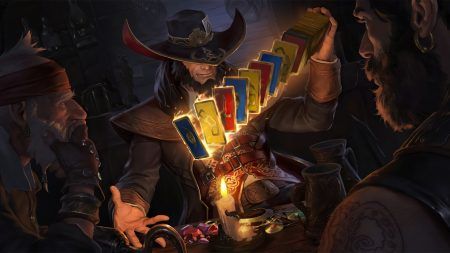 Legends of Runeterra is Riot’s first multiplayer card game and is set in the same world as League of Legends.

Players duel each other with 40-card decks, consisting of units and spells from seven different regions. If you’re unfamiliar with the game, or even the concept of trading card games in general, this guide will tell you everything you need to know to start playing Legends of Runeterra.

A game in Legends of Runeterra is a duel between two players, each with a Nexus that starts with 20 health points. Your goal is to destroy your opponent’s Nexus by bringing it down to zero.

To summon units, you are given mana at the start of every round. Your mana refills and adds one point per round. For your unused mana, it will go into your 3-point reserve right under your mana called “Spell Mana.” This reserve mana can only be used for spells and will only eat into your main mana once you’ve used all of it. This will be essential in later rounds when you have a maximum of 13 mana at your disposal to summon units and cast spells.

The game goes through turns of attacking and blocking. When you have the attack token, you can act first and put your summoned units onto the playing field to attack the enemy. Your opponent will have the chance to cast spells and block your attacks with their summoned units, but remember that blocking units can only defend and do damage to units, leaving your Nexus safe during your attacks.

When blocking, you’ll be using your units to protect your Nexus from your opponent’s summons, giving you a chance to kill attackers with stronger units or shield attacks with weaker units. By the end of every round, you’d want to have a unit deficit in your favor so that the opponent has to spend mana to match your units on the board.

There are currently seven lore regions that are represented in LoR, with each having their own style of play. Your deck will consist of two regions so you can mix and match to form either a convenient or radical synergy that will grant you a victory.

To help you out, I’ve listed all the regions down with a brief description of their playstyle along with some of their more favored keywords.

For beginners, I recommend Demacia and Freljord as they have the perfect synergy to provide you with a deck that’s filled with buffs and medium-cost units. You are given a ton of Challenger units that eliminate key enemy units while giving you a strong offensive game with champions like Tryndamere and Garen.

Cards in LoR have different keywords that help define what they can do for you on the board. Though most of the keywords aren’t exclusive to a region, many of the regions have a specific keyword that they specialize in.

Since we’ve already talked about Demacia and Freljord, here’s a quick overview of all their favored unit keywords.

Demacia’s known to have a wide array of specialized units. Challenger units like Fiora and Laurent Protege provide you with a quick way to take down opponents and freeing up your offense. Scout units like Quinn and Valor give you two chances to attack and, if you pair that up with Rally, you can easily break down your opponent’s Nexus with four attacks in just one round.

While Demacia is loaded with keywords, Freljord specializes in one exclusive keyword: Frostbite. This is the region’s key tactic in dismantling the enemy’s defenses. With Ashe and Rimetusk Shaman providing Frostbite every round they participate in, you instantly take out your opponent’s strongest unit at no cost. To add on, Ashe’s level 2 skill removes the blocking ability of frostbitten units, giving your attacking frontline an even bigger advantage.

Aside from our given synergy, you have to watch out for a few other keywords that will sneak into the battlefield. 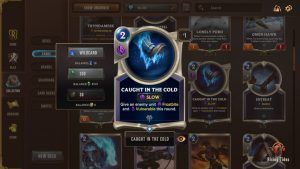 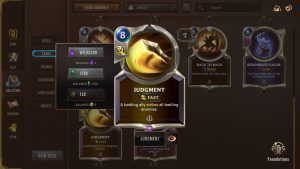 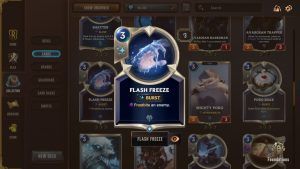 LoR’s spell cards are fairly straightforward and are similar to unit effects such as Stun and Frostbite. The only difference with spells is that they have time restraints on when they can be played. Here are the three types of spells with a description and examples of Demacian and Freljord spells:

You also have to watch out for some killer spells from other regions. Shadow Isles’ Ruination spell will kill every units on the board, essentially restarting the game to the opponent’s favor. Ionia also has a ridiculous 4-cost Deny spell that will deny fast and slow spells so if you plan to cast a game-changing spell, make sure your opponent has no mana to spare. 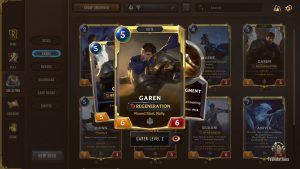 Last, but not least, your decks are likely to revolve around your regions’ champions. Each region has a set of champions that can level up to gain more power and health and get new skills.

For example, Demacia’s easiest champion, Garen, levels up once you’ve struck twice with him, granting him +1|+1 and a rally on round start. With Garen’s regeneration and rally, you can guarantee damage on your end in every round without being too worried about losing your Garen to an enemy. Of course, make sure you have a healing burst card just in case your opponent matches him with a stronger opponent.

Here is a list of all the champions in Demacia and Freljord and their stats:

We hope this guide will be a good jumpstart into your deck-building and dueling for Legends of Runeterra. You can also check out the in-game challenges to refine your skills in a practice setting.

READ MORE: Legends of Runeterra officially launches this week with 120 new cards and a new region