The team has secured a Group Stage seed into this year’s Mid-Season Invitational. 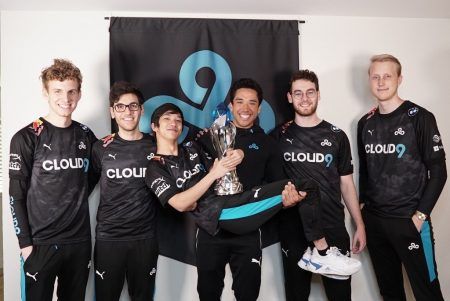 Coming off a stellar regular season, Cloud9 has capped off its 2020 LCS Spring run with a dominating 3-0 sweep over FlyQuest in the Final.

This is Cloud9’s first LCS title in six years despite qualifying for the playoffs every year since its inception.

Cloud9 started at a slow and steady pace in game one, doing their best to keep FlyQuest at bay. Both teams traded kills here but neither could take the advantage until Cloud9 finally won a decisive 4v5 clash that saw Jesper “Zven” Svenningsen take out Lucas “Santorin” Larsen early with a melting Bullet Time.

With Baron and Ocean Soul now on their team, Cloud9 proceeded to charge through the mid lane, claiming a few more FLY players. With only two members left to defend the FlyQuest base, C9 closed out game one at the 40-minute-mark.

Similar to game one, C9 excelled in their map dominance, claiming both Baron and Ocean Soul once again. With such incredible buffs, the team caught FlyQuest in their bot jungle and got the clean ace, prompting them to leave the Elder Dragon and go straight for FlyQuest’s Nexus to end game two.

With the cushion of two games on the scoreboard, C9 opted for a riskier playstyle in the third and potentially final game of the championship series. Although FlyQuest took advantage of C9’s more flashy playstyle, C9 got the upper hand with Blaber’s Cataclysm taking out Santorin, while Philippe “Vulcan” Laflamme hooked Colin “Solo” Earnest into the reach of his team. With the 3v5 advantage, C9 claimed the bot lane inhibitor along with one Nexus turret.

Just before the 30-minute mark, Cloud9 went for the jugular with a big push through the mid lane. Although Zven fell in the initial clash, Eric “Licorice” Ritchie avenged his fallen teammate with a huge triple kill that all but ended the game.

The remaining FlyQuest members did their best to stall C9 but Licorice maneuvered through them to land the final blow on the FlyQuest Nexus, completing the series sweep for Cloud9.

Cloud9’s championship victory is their second LCS Playoffs win, with their first coming in the 2014 Spring Playoffs against Team SoloMid.

Along with the prestigious LCS trophy, Cloud9 will receive US$100,000 and a Group Stage seed into this year’s Mid-Season Invitational (MSI).