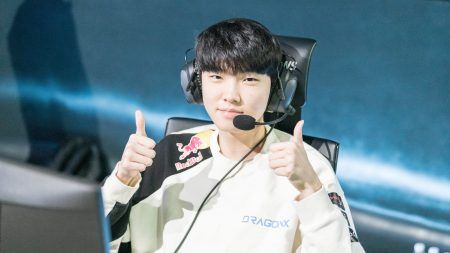 The League of Legends Champions Korea has released a statistics wrap-up of the 2020 Spring Split, featuring season highlights from the league’s most distinguished players.

Here’s a look at five that caught our eye.

Lee “HyBriD” Woo-jin was a dominant offensive force this season. Even as a rookie, the backline hotshot scored three pentakills on his first-ever LCK split. On top of that, each pentakill ended up being a game-winning play for APK Prince.

While pentakills are mostly a team effort, Jung “Chovy” Ji-hoon and Jang “Nuguri” Hae-jang proved their solo skills by winning the most 1v1 duels this season. The DRX midlaner and DWG toplaner are tied as the best solo-killers in the league, racking up 18 solo-kills apiece.

Nuguri and Chovy often interchange their roles of mid and top due to their similar playstyles. Both players play with more aggressive champions like Aatrox and Rumble that easily hunt down enemy mage champions. Nuguri also does a good job of bruising down enemies in the top lane with characters like Sett and Jayce.

Kim “Clid” Tae-min is one bloodthirsty jungle ever since his move to Gen.G. Other than being one of the best junglers of the LCK, Clid has a very active playstyle that is very much dependent on his carry-heavy champions.

With characters like Lee-Sin and Jarvan IV at his disposal, Clid easily roams the map early on for his team’s first kill. Looking at the percentages, Clid participated in 61% of all first bloods for Gen.G while, as a team, Gen.G was able to grab first blood in 75% of their games.

Most kills in a game: DAMWON Gaming vs APK Prince (51)

The LCK’s bloodiest game saw DAMWON Gaming take on APK Prince. DWG were on a four-game losing streak so they were desperate to win against one of the lower-tier teams in the LCK. Luckily enough, DWG overpowered APK with one last team fight, ending the game with 30 kills to themselves and 21 to APK (51 in total). The game also turned out to be the longest game of the season with a runtime of 54 minutes and 36 seconds.

Deft was the deadliest ADC this season with a kill-count of 255 in 55 games, giving him an average of 4.6 kills a game. The DRX backliner knew how to interact with Keria and the rest of DRX’s crowd control to get into the perfect position to hunt down his opponents.

Meanwhile, despite it being his rookie season, Keria showcased great mechanics and synergy with Deft, racking up a massive 473 assists for the season (an average of 8.6 assists a game), proving himself as one of the league’s best support players.