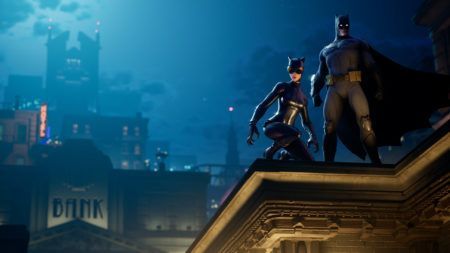 Explore the mysterious alleys and dark streets of Batman’s hometown, all while completing a set of challenges for free in-game rewards.

For the duration of the event, Epic has also enabled unlimited use of Glider Redeploy so players can glide around the city like the Dark Knight himself.

For diehard Batman fans, a Caped Crusader Bundle is available in the store, which includes the Batman pickaxe, Batwing glider, a Batman skin based on his classic comic book appearance, and one based on the suit from Christopher Nolan’s trilogy of Batman movies.

Aside from the bundle, the Shop also offers individual Batman-themed items such as this Catwoman Comic Book Outfit!