Don’t try this in your pubs. 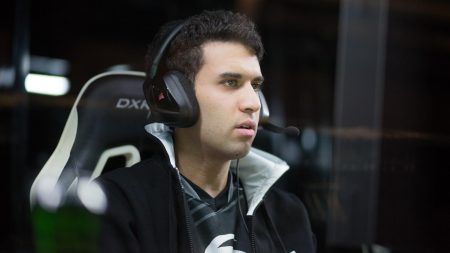 Secret flexed their dominance by picking an unusual support Sniper for Yazied “YapzOr” Jaradat in game one and took a commanding win with it, leading to the series sweep.

VP.Prodigy opted for a heavy teamfight composition with Egor “epileptick1d” Grigorenko on a safelane Death Prophet, Rostislav “fn” Lozovoy on a mid Clinkz, Dmitry “DM” Dorokhin on Mars, Vitaly “Save-” Melnik on a support Windranger, and Albert “eine” Garaev on Treant Protector.

Secret handily won the laning phase and were in a dominant position early, which allowed YapzOr to rush for an Aghanim’s Scepter and have it done by the 20-minute mark. With his Scepter-empowered Assassinate, YapzOr could instantly stun enemies for 1.8 seconds from a huge range, which helped Secret win a crucial clash at the 23-minute mark that opened up VP.P’s base.

VP.P showed signs of life after they repelled an overeager push by their opponents, thanks to Eine hitting a massive five-man Overgrowth. However, Secret struck back hard and reasserted their dominance by scoring a teamwipe on VP.P by their tier two tower then taking down their barracks at the mid lane by the 30-minute mark.

Even as VP.P fell into a 15,000 gold deficit, Save’s Windranger kept his team within striking distance of Secret by hitting clutch Shackleshots to set up back-to-back pickoffs on their enemy cores.

As the game breached the 40-minute mark, both teams began posturing around the Roshan pit and angling for the game’s deciding clash. Secret skillfully outlasted VP.P’s ultimates then picked off epileptick1d and DM on the retreat to score a decisive teamfight victory and eventually force the GG call after 45 minutes.

Matumbaman led the way for Secret with a 12/5/19 KDA, while Nisha and zai notched 7 kills apiece. However, YapzOr arguably put on the most impressive performance of the game with his Sniper, as he notched 6 kills and a game-high 23 assists against just two deaths with a hero that is never used in the support role.

VP.P seemed to have been discombobulated after losing to a support Sniper to open the series, as Secret demolished them in a 17-minute game two then secured the sweep in 27 minutes in game three.

Even so, finishing in second place behind Secret is no small feat, especially for a young, ‘developmental’ squad like VP.P. They will be taking home US$45,000 in consolation.