No-one could have predicted this. 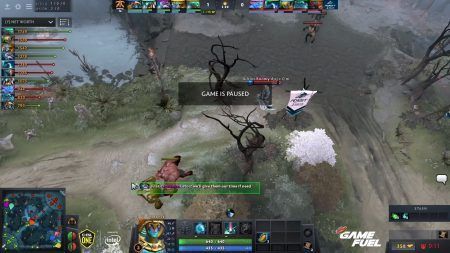 Filipino Dota 2 organization, Team Adroit, missed out on a chance to qualify for the Los Angeles Major today during their Southeast Asian Closed Qualifier semifinals match against Fnatic.

Adroit was forced to forfeit game one due to internet issues in their bootcamp facility.

The team then decided to play game two from a local internet cafe, but still encountered connection issues, with Jun “Bok” Kanehara repeatedly disconnecting from the game.

Adroit had to use their 10-minute pause period to try to resolve the problem but were still having difficulty playing.

In an even more unusual turn of events, Daryl Koh Pei “iceiceice” Xiang decided to give Fnatic’s 10-minute pause period to Adroit.

He jokingly added, “I am March,” referencing Cignal Ultra losing to TNC Predator during the DreamLeague Season 13: Leipzig Major SEA closed qualifier due to similar internet issues. In that match, TNC captain Park “March” Tae-won decided to unpause the game after the entire Cignal Ultra squad had disconnected from the game.

Adroit tried to continue with the game but after yet another disconnect at the 17-minute mark, the team decided to throw in the towel.

As a result, Fnatic has now qualified for the ESL One Los Angeles 2020 Major.

Adroit took to Twitter to confirm their unfortunate loss to Fnatic. They still have a chance to qualify for the Major if they can win their third-place match where they will face the loser of Geek Fam vs IO Dota2.