The Indonesian squad are making things look easy in their hometown. 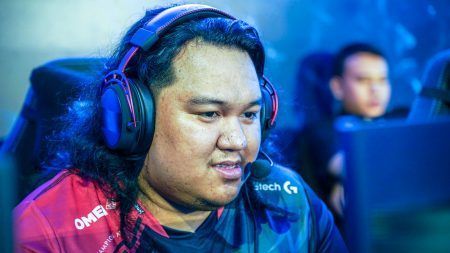 Meanwhile, Boom went with a Storm Spirit and Lifestealer carry combo, along with an offlane Timbersaw.

Team Oracle used a tri-lane strategy with Abaddon, Rubick, and Io applying pressure against the enemy Nyx Assassin and Timbersaw.

BOOM was the team to make the first move and at the 16-minute mark, they attempted an Infest-Ball Lighting combo, but it was repelled by Team Oracle’s multiple heals.

However, once both teams engaged in another full team fight, Raafli Fathur “Mikoto” Rahman’s Storm Spirit and Randy “Dreamocel” Sapoetra’s Lifestealer proved too much for Team Oracle to handle.

Team Oracle made attempts at team fights kept in different parts of the map, but they were unable to get the upper hand on BOOM, who cruised to an easy 30-minute victory with a 30-8 final kill score.

Meanwhile, Oracle decided to go with two playmaking heroes in Puck and Pangolier, along with Troll Warlord on Ghost, who went back to his original hard carry role.

While Boom’s Mikoto struggled in the middle lane against Oracle’s Meng “No7” Ou’s Puck, Dreamocel’s Faceless Void took the top spot of the networth chart and quickly impacted the game with his timely Chronosphere utlimates.

Team Oracle played timidly after losing their first major team fight, and couldn’t get a foothold on the game.

Just before the 30-minute mark, BOOM pushed the action towards Team Oracle’s side of the map where they began taking down key buildings and eventually finished the game after amassing a 23,000 gold lead.

Dreamocel finished the game with a perfect 13/0/10 KDA, and was by far, the MVP of the day.

With their 2-0 win, BOOM Esports advances to the Grand Final of the Indonesia Regional Qualifier.

Meanwhile, Team Oracle drops to the Lower Bracket Final, where they await the winner of Tyrants Uprising and T1’s Lower Bracket Semifinal match.