Are you ready to take on the challenge of the most powerful mage in the Dota 2 universe? 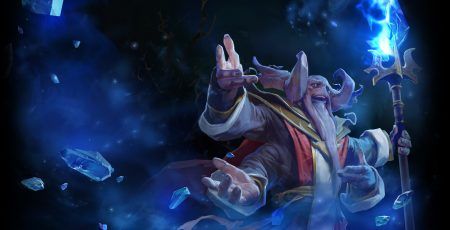 The new mode is free-to-play for all Dota 2 players, not just Battle Pass owners, and features the mighty Aghanim, the Apex Mage, creator of the Aghanim’s Scepter, and father to Rubick.

Team up with three friends or matchmake to form a party of four to take on the labyrinth and its many rooms full of enemies until you meet the final boss, the mighty Aghanim himself.

The hero pool you can choose from in the game mode is very limited, however, as you can only play as either Disruptor, Magnus, Mars, Omniknight, Snapfire, Sniper, Tusk, Ursa Warrior, Viper, Weaver, or Witch Doctor. Determine which roles each member of your party will take then carefully choose the right hero for the job.

Your journey through the labyrinth will be determined by your party’s choices, as you will have to choose between two rooms and the respective rewards for clearing them to advance further into the maze. Clearing each room will also grant you shards of the Aghanim’s Scepter, which allows you to choose enhancements for your hero’s stats and abilities.

Clearing the labyrinth the first time will enable an escalating challenge mechanic that lets you take on Aghanim’s challenge again on four different Ascension Levels, with each granting a unique Aghanim chat wheel voice line once you clear them.

Grinding the labyrinth will also earn you Arcane Fragments, which unlock permanent upgrades that will help you in your future attempts at clearing it. There will be a 3x bonus on the first 1,800 Arcane Fragments that a player earns each week.

Try to master the labyrinth this week, as next week you will be able to test your mettle against other players in Aghanim’s Trials. The Trials will see players take on randomly-generated labyrinths, with the fastest and most successful runs being put on a global weekly leaderboard.

The parties with the best runs in the weekly trials will be granted a variety of rewards, which are separated into different tiers.

The Tier 1 prize, which will go to whoever tops the weekly leaderboard, will be ‘Aghanim’s Interdimensional Baby Roshan’ courier.

The Tier 2 prize, which will go to the first to third-placed runs every week, will be the ‘Waterlogged Shoes’ cosmetic item for Kunkka.

The Tier 3 prize, which will go to the top ten runs every week, will be a random Arcana. Finally, beating the first boss in each week will grant you the weekly in-game ‘Aghanim’s Effect’ aura.

For more details on Aghanim’s Labyrinth and Trials, check out the official Dota 2 blog post.