12 new heroes and a new Jail mechanic are set to arrive with Dota Underlords’ Big Update. 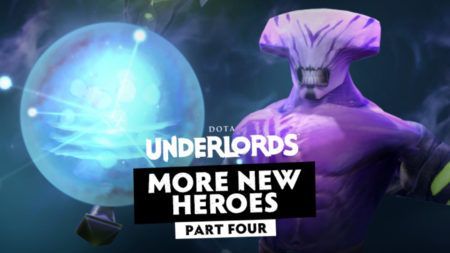 The fourth preview for Dota Underlords’ highly-anticipated “Big Update” has been released, revealing the last of the new heroes in Io and Faceless Void as well as a new daily hero “Jail” mechanic.

Io is a tier three hero that belongs to the Primordial and Druid alliances. Much like in Dota 2, Io’s abilities are geared towards keeping its teammates alive.

Its first ability, Tether, lets Io latch on to an ally and give them both attack speed and damage reduction. Once an allied hero falls in battle however, Io can then use its Relocate ability to teleport away momentarily and return with that revived ally.

Meanwhile, Faceless Void is an Ace tier hero under the Primordial and Assassin alliances.

While his signature Chronosphere ability from Dota 2 has been changed to a Chronocube to fit the Underlords board, it’s still a powerful ability that stuns all units caught in it while granting Faceless Void bonus movement and attack speed.

As the Ace of Assassins, having Faceless Void on the board grants his fellow assassins a chance to avoid both physical and magical damage by jumping backwards in time.

With 12 new heroes coming with the Big Update, Underlods will also be introducing a new Jail mechanic to address an expected difficulty in ranking up heroes due to the sheer size of the roster.

Every 24 hours, 8-12 heroes will be removed from the pool of heroes available for hire in the shop and thrown into the Jail.

The list of heroes up for banning are determined in such a way that all alliances can still be completed despite their absence.

“Not only have we found it adds a great variance to the game from day to day, but most importantly, we didn’t see any change to the rate Heroes can be Ranked Up,” the Dota Underlords team assured in the preview.

With all of the heroes coming with the Big Update already announced, all that’s left to reveal will be the game’s titular Underlords. These Underlords are expected to bring unique gameplay-affecting changes tailored to a certain playstyle to further add depth and variance to gameplay.