Is Swagg’s AMP63 class the most powerful handgun build in Warzone?

Step aside, Sykov. There’s a new pistol in town. 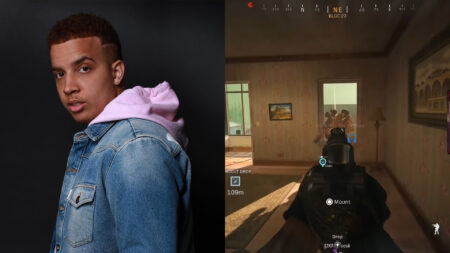 Streamer Kris “Swagg” Lamberson unveiled his newest AMP63 class that could be the next best secondary weapon in Call of Duty: Warzone.

The rise of the AMP63 pistol came around with its substantial buffs in the Season 4 update. The Warzone developers were looking to create a faster killing secondary weapon similar to the previously overpowered Sykov pistol.

Details of Swagg’s AMP63 class in Call of Duty: Warzone

Swagg uses the AMP63 as a close-range option alongside his FARA 83 assault rifle, and nicknamed it the “pocket rocket” for its insanely quick damage output.

With the AMP63 being a default secondary weapon, Swagg is able to slot in Ghost as his second perk rather than Overkill, a perk that allows two primary weapons.

In turn, the Ghost perk lets you pass through UAVs, heartbeat sensors, and radar drones undetected, giving you a greater chance of winning fast firefights with the AMP63.

The only downside of the AMP63 class is its limited ammo capacity. While it can rival the damage outputs of top-tier shotguns and SMGs, Swagg believes that it is a “solos/duos only type of gun” and cannot keep up against bigger squads.

In the video, the streamer grabbed a Warzone victory with the AMP63, putting up 34 kills and a total of 11,517 damage.

Here are the details of the AMP63 class in Call of Duty: Warzone:

To see the AMP63 pistol in action, you can check out Swagg’s full video down below:

READ MORE: Is ZLaner’s C58 class the next best AR in Warzone?