This is Cold War era Verdansk before it got nuked. Call of Duty: Warzone has hit the rewind button for its third season and delivers a breathtaking view of Verdansk in the 1980s. While the battle royale mechanics stay the same, Verdansk ’84 features some retro makeovers of some iconic points of interest in the fictional city.

Here is every updated location in Warzone’s Verdansk ’84 map.

With commercialism booming in the 80s, Superstore is the most obvious location in need of a solid facelift.

Decked out with larger-than-life shopping signs and modern parking spaces, Superstore gives players a one-stop-shop to get some quick gear. You can now shoot out the newly installed skylights to gain access to the store’s many shelves. Once you’re done shopping, you can make a fast exit through the new windows of the reception area.

The Verdansk Airport is now in pristine condition and appears to be fully operational as a regional travel hub. With no fires and debris in the area, players can drop down from the skylights and rummage through the newly accessible second floor of the airport.

Once you catch sight of the extra exit to the Runway Underpass, you can create some chaos outside and find some cover around the two parked planes.

For a better overview of the runway area, you can also head over to the aerospace-themed Control Tower. While it might give you sightlines of the general area, the main building is now covered, making it a less desirable place to camp for kills.

Verdansk’s Downtown opens up as a developing version of its previous cityscape. With fewer highrise buildings and rooftops to watch, players can enjoy a more grounded experience in the bustling district.

If you’re willing to enter an unfinished skyscraper, the Broadcast building is more accessible than ever with an interior stairwell to the top three floors. If that’s not high enough, you can land on the higher construction crane right next to the building, providing a great sniper’s view of Downtown. 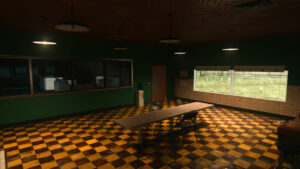 The BCH TV Station now sports a new satellite dish on the roof, so your squad can drop down and garrison the rooftop with an eagle-eye view looking over Downtown and Stadium.

TV Station also comes through with some snazzy 80’s interior design, giving you and your squad a warm welcome as you loot its several floors. While it prides itself as a defensive location to hold out firefights, the developers have also added windows along the southern wall to grant access to the nearby buy station at the comms tower.

One of the most iconic locations of Warzone, the Verdansk Stadium is now a demolition site.

Featuring a more open landscape than the modern-day Stadium, the Verdansk Soccer Arena keeps up its reputation as a hot drop with various entry points other than the sky. There are five ground-level entrances and a sixth makeshift entrance in the southern wall caused by the arena’s current teardown.

If you happen to miss the drop, your troop can drive a truck through any of the entrances and make your way to the loot-filled construction huts on the middle of the field.

While the arena is flatter compared to its modern counterpart, you can gain a vertical advantage by landing on top of the giant yellow construction crane. Be careful though since you’ll be a sitting duck to grounded snipers.