Inside the Singapore AoV squad at SEA Games 2019: Before the tournament

Travel mishaps, delays, and low team morale plague Singapore’s AoV squad as they prepare for their first game at the SEA Games. 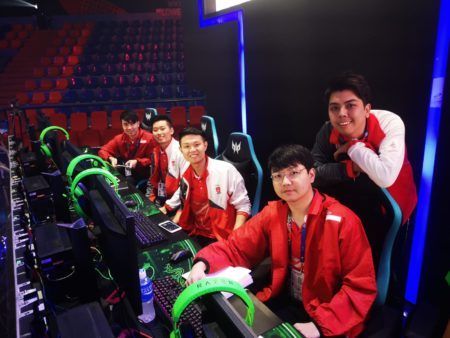 This is part of “Inside the Singapore AoV squad“, a series that will take you behind the scenes with Singapore’s SEA Games 2019 Arena of Valor team as they represent their country and try to bring home a gold medal for Singapore.

My name is Jacky Ng and I’m the coach for Singapore’s Arena of Valor team at SEA Games 2019.

After two rescheduled flights, the Singapore esports team finally arrives in Manila close to midnight. Unfortunately, our bus from the airport to the hotel doesn’t arrive on time, and we end up only reaching the hotel close to 2 a.m.

Despite the late hour, we decide to get some practice in and train until 4 a.m. before heading to bed.

Before I go to sleep, I share the group draw with the team. We’re in Group B along with Malaysia, Laos, and Indonesia. The players are extra motivated after seeing the draw. That’s because we can avoid playing against Thailand and Vietnam, the two strongest teams in the competition.

We felt that we could beat Malaysia and secure the second seed position.

The players wake up at 9 a.m. for breakfast. We decide to stay at the hotel to scrim rather than head to the training venue as, surprisingly, the ping is actually better using the hotel wi-fi.

Our first scrim is against Liyab Esports, the representatives from the Philippines.

We end up scrimming for five hours. Unfortunately, scrims did not go well, and there were conflicts within the team as we couldn’t decide on a unified strategy or composition.

At 8 p.m. we decide to break for dinner.

After dinner, our most experienced player, Bjorn “Zeys” Ong, tries to rally the team by going through team rotations, composition, and some fundamental plays for the team to work on.

Despite Zeys’ best efforts, team expectations are low at the moment.

After the opening ceremony, most of the team heads back to the hotel to train as there’s no wi-fi available in the stadium.

Zeys remains in the stadium as he’s not just a player on the AoV team, but also the coach of Singapore’s MLBB team, which is playing today.

Team morale hits an all-time low as the remaining players are unable to scrim with Zeys missing, and can only work on their individual plays. Even worse, more delays in the MLBB tournament result in Zeys only reaching the hotel past 9 p.m., giving us just a few hours to train as a complete squad.

We have no games today but the team was required to head to the stadium to set up their tournament server accounts.

By the time we get back to the hotel, it’s already 3 p.m. I pull the entire team together for a team talk. The team decides to put their differences aside and try to work things out. We all realize that this may be our only opportunity to represent our country on an international level, and we don’t want to waste it.

We spend the rest of the afternoon scrimming against various countries.

Fortunately, after the team pep talk, our scrim results are much better, and we put in some good performances against the other teams we’ll be facing tomorrow.

Morale and positivity are up, and we continue practicing all the way until midnight.

Tomorrow, we have our first game.