“Using a new weapon skin should never mean having to relearn a weapon.”

Riot has been consistently transparent about Valorant’s development process. This time, the dev team is giving fans a behind-the-scenes peek into how they design weapon skins and how they decide which ones to make.

Valorant producer, Preeti Khanolkar, and the premium content team are the creative minds responsible for all the cosmetic designs in Valorant, which include weapon skins, gun buddies, sprays, and more. But they’ve decided to focus on just weapon skins in Riot’s most recent Valorant blog post. 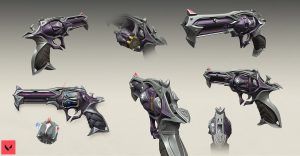 Khanolkar explains that the team has a specific set of rules when it comes to weapon customization, in that a skin’s model, art, visual effects, animation, and sound are fully immersive in first-person only. Meanwhile, teammates and opponents will see a skin’s model only in a third-person player’s perspective. There will also be no pay-to-win advantages or pay-to-lose disadvantages with regards to weapon skins.

The team further explains its process of creating new skins for Valorant fans. The design is based on the research team’s data collected from player surveys and lab feedback. So, if there are weapon skin designs you want made, be sure to participate in Riot’s surveys.

For weapon skin animation, the team also states that “using a new weapon skin should never mean having to relearn a weapon.” This means that said weapon shouldn’t feel slower, or take up less (or more) space on your screen. Feeling faster, however, is okay; though “actually being faster is unacceptable.”

The most interesting aspect of the weapon skin post is how the team tackles audio changes for different weapons. The team explains that weapon skins will have different sound cues, but they will make sure it’s not any louder or quieter than the base version. “We never want you to think you failed to clutch a round because a skin caused you to miss a critical sound cue,” said Khanolkar. “If you’re relying on audio for your spray control, we don’t want new firing sounds to mess with that.”