Philly turned the heat up with some great Tekken. 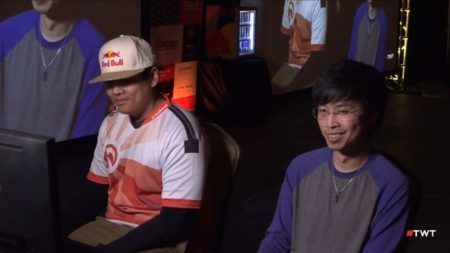 Taking place in Philadelphia, the Summer Jam 13 featured a lineup including eight of the best Tekken players from the Tekken World Tour. Here are our ten favorite plays from the Master tournament in Philadelphia.

Yuta “Chikurin” Take brought Choi “Saint” Jinwoo to Howard Estate and destroyed him on Geese’s homecourt. In the highlight play, Chikurin burns his meter to get two wall breaks and ends it with a deadly Rage Art.

Shoji “Double” Takakubo is one of the best Marshall Law players in the world and, unfortunately, Hoa “Anakin” Luu wasn’t able to tame the dragon in the first game. Double launched Anakin into the wall and finished him with a Dragon cannon, closing out the first game with a perfect round.

The Jack-7 player later got his revenge against Double. After a few successful punch combos, Anakin quickly ducked Double’s third high kick and responded with a while-standing kick and the coveted seven golden letters.

Jimmy “JimmyJTran” Tran is one of Anakin’s main rivals in the USA Tekken scene. With Anakin defeating Jimmy at last year’s Summer Jam, the Bryan player proved that this year was a different story. Jimmy manages to catch Anakin in a slow-mo jump, and followed through with his original combo to finish the round.

With his lightning-fast reactions, Double was an unstoppable threat against Saint. With Saint trying to close out the round with a quick kick, Double sidestepped and instantly executed his Rage Art for the K.O.

Saint was able to make it up with an insane read later in the match. After Double brought Saint’s life to a pixel, he tried to finish him with a quick low, but Saint read the move and sent Double flying with a parry combo.

FightingGM still showed promise with his main character of Lee. In one of their last rounds together, FightingGM canceled Jimmy’s Rage Drive with Lee’s signature high counter-hit kick combo.

Tekken God Son “Qudans” Byeong-mun fell into a hard outplay against Double. With both players sporting just a bit of health left, Qudans ran in for a dive, only to end up right under Marshall Law’s showboating Rainbow Flip.

In an intense Jack-7 mirror match, Anakin pulled out an amazing Debug that left Saint with a sliver of life. With both players on the defensive, Anakin rushed in during the last ten seconds and punished Saint’s whiff with a low punch.

READ MORE: All of the best Tekken highlights from FV Cup 2019