Chikurin still reigns as one of Japan’s best Tekken players. 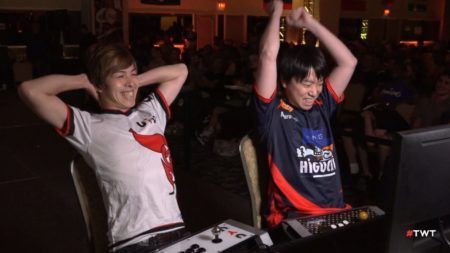 Summer Jam 13, despite being on American soil, featured an all-Japan Grand Final. Yuta “Chikurin” Take took first place with an undefeated run, but Shoji “Double” Takakubo was a strong and worthy opponent that kept the THY player on his feet.

In the Grand Finals, Chikurin went with his usual choice of Geese Howard while Double stuck with his main character of Marshall Law.

Double showed a lot of promise in the first game. Although Chikurin was already letting out meter burns and projectiles, Double kept his composure and focused on stopping Chikurin’s combos. After a hard-hitting combo from Chikurin, Double easily read his low and parried it to finish the second round.

With momentum on his side, Double just needed a quick punch to secure game one of the Finals.

Seeing through Double’s rush-down technique, Chikurin prioritized getting counter-hits to start his meter-burn combos. In the final round of the second game, Chikurin trapped Double in a Raging Storm, leaving him with a game two win for a tie.

Even with Chikurin’s win, Double stayed unphased and kept the pressure on the THY player. In the last round of Game 3, Double executed Law’s signature parry and claimed another game with a sure-shot Legend Kick.

To give himself an advantage, Chikurin went to stage select and chose his homecourt, Howard Estate. With more walls, Chikurin now had the opportunity to create longer, more damaging combos to Double. With just one counter hit, Chikurin executed three wall breaks and one ground grab, taking more than 70% of Double’s health.

With all the walls and balconies broken, the two Japanese players battled it out on the ground floor. With only one round left to a reset, Double tried to unleash his Rage Art on Chikurin, but Chikurin blocked the attempt and finished him with a punishing punch combo.

With everything tied up, Chikurin took matters into his own hands. In game five, the THY player sped through two rounds just by ducking and counter hitting the UYU player.

Although Double was running out of steam, he was able to snatch one more round from Chikurin. With just one small whiff from the Geese player, Double capitalized and stalled Chikurin’s win with a flashy Legend Kick.

With the last round of the tournament, Chikurin distanced himself once he got a significant health advantage. With Double trying to rush him down for some damage, Chikurin executed one last Reppuken to the dashing Law to secure his well-earned victory.

With his second Master event win, Chikurin gets US$2,500 and 300 Tekken points, launching him up to third place on the Tekken World Tour leaderboard. As for Double, he takes home US$1,250 and 220 TP, placing him tenth in global rankings.

The next TWT event will be Cape Town Showdown in Cape Town, South Africa, which will take place on September 7-8.