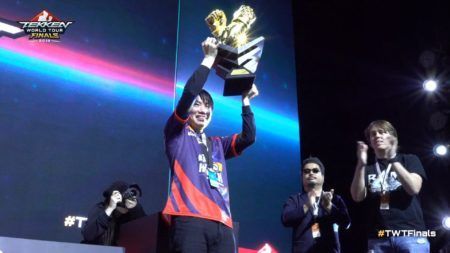 In the first round, Ulsan looked to have the upper hand, and Chikurin dropped a few combos, giving Ulsan more than enough chances to secure victory.

However, Chikurin started warming up in round two and managed to land some big meter-burn combos.

For game two, Ulsan selected an infinite stage to limit Akuma’s combo potential, but it wasn’t enough to slow down Chikurin. In round two, despite having just a pixel of health left, he hit two massive combos, ending the last one with a Raging Demon, and absolutely erasing Ulsan’s health bar in just nine seconds.

However, in the final round, Chikurin immediately landed a huge meter burn combo , leaving Ulsan at low health.

Ulsan did his best to recover, but Chikurin’s overwhelming pressure was too much for the Korean, and after an easily blocked low, he counterattacked to win the game, and with it his first TWT finals trophy.

With his incredible win, Chikurin went home with US$50,000 and the prestigious 2019 Tekken World Tour trophy designed by Pure Arts Limited.