He was literally with a handicap. 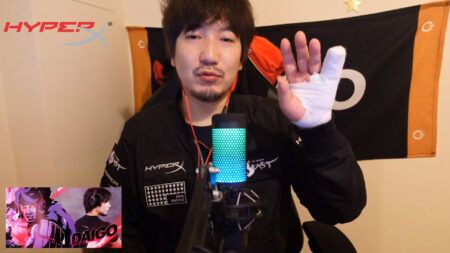 The legend of Daigo “The Beast” Umehara continues, as the fighting game icon outclassed his opponent, Tsunehiro “gachikun” Kanamori, in the final match of the CPT Season Final.

What made the win even more special is the fact that Daigo won the match with a fractured little finger on his left hand. Daigo had injured himself after he slipped and fell a few days before the CPT Season Final. He even streamed on Twitch to promote some Hyper X products, but his chat kept asking about the injury.

The 39 year old pro player initially thought his finger was broken because of the amount of swelling. But a trip to the hospital revealed that it was only a fracture.

While Daigo says the injury “is really not a big deal,” he also admitted that it interferes with his game play. “When I input forward jump, it hurts,” he shared. Since Daigo’s injury is on his left hand, and he uses a Qanba Obsidian fight stick, doing quick inputs on his arcade stick does sound challenging. 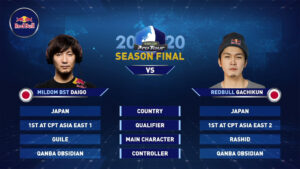 But if you watched his match against Gachikun, you probably wouldn’t have known he was injured because his input execution was on point.

At the start of the best-of-seven match, Daigo contested Rashid’s aerial attacks, which caused Gachikun to make pivotal mistakes.

Daigo notably didn’t drop any of Guile’s difficult V-Trigger 1 combos that have a critical art finisher. In fact, he didn’t miss a single Flash Kick into Sonic Hurricane critical art. For those who don’t play charge characters, this type of execution is extremely difficult, which just goes to show how great of a player Daigo still is today.

Daigo won his match by showcasing his incredible defensive skills, and blocking Gachikun’s two-sided attack with Rashid’s Yasaar V-Trigger whirlwind from behind.

After the match, the CPT Season Final panel praised Daigo, with Rob “RobTV” Burney calling out doubters and claiming that Daigo is the undisputed, greatest Street Fighter player of all time.

You can watch the full match between Daigo and Gachikun here: