Sako demonstrates how to corner-carry your opponent in one combo. 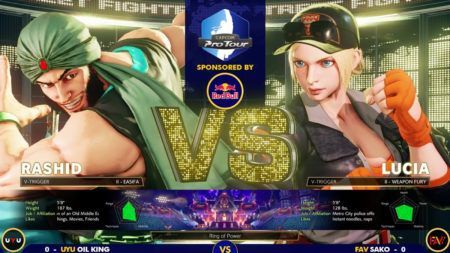 Naoto “Sako” Sako is known for playing off-meta, high-execution characters like Menat and Kage, so it shouldn’t be too much of a surprise that he became the first top-tier player to pick Lucia at a competitive tournament.

Lucia is one of three new DLC characters announced before Evo 2019, along with E.Honda and Poison.

In his match against LeWei “Oil King” Lin, Sako opted for Lucia instead of his main, Menat, or his secondary character, Kage.

Sako also showcased Lucia’s incredible corner-carry combo potential, pushing Rashid all the way into the corner and stunning him there with just two combos.

Sako did it again in the next round, pressuring Oil King in the corner and finishing off the game with two dash in throws.

Sako next picked Lucia against Naoki “Moke” Nakayama’s Rashid in Top 8. While Sako ended up losing 3-1, he still managed to showcase some amazing moves during the match.

SEE MORE: Bonchan dominates at Celtic Throwdown and takes the top spot in the CPT rankings